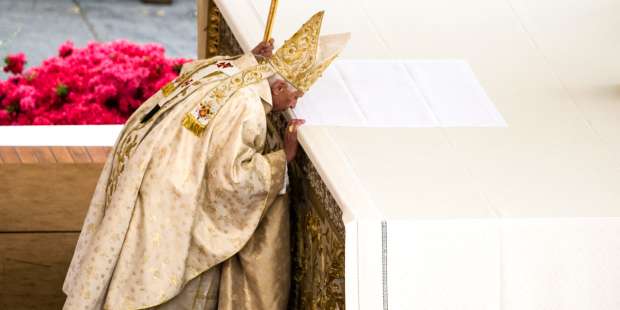 This is why the priest kisses the altar at Mass

The liturgical custom is one of the oldest, dating back to the 4th century.

Before celebrating every Mass the priest (and deacon) approach the altar and kiss it. To some this practice seems rather odd, as altars are material objects of stone or wood and don’t seem to warrant any particular reverence.

What is the significance behind this ancient custom?

Kissing holy and sacred objects has been part of various world religions for thousands of years. The practice comes from cultures where the kiss was viewed as a sign of respect or used as a greeting and was naturally applied to objects that represented the divine.

Outside of pagan worship there also grew a tradition in some cultures of kissing the dinner table at special occasions.

As Christians developed the liturgy they adapted customs from their own culture and gave them new significance. Kissing the altar was one of them and was quickly attached to the actions of the priest at Mass.

The altar receives its importance in connection with the Holy Sacrifice of the Mass that is celebrated upon it. It has been set apart for this purpose and the bishop consecrates it when it is installed in a new church. The ceremony of consecration mimics in some ways the baptism of a new Christian as the bishop uses holy oils to bless the altar and vests it with a white garment after the prayers have been completed.

Kissing the altar can then be viewed as honoring the special role it has in the liturgy and the consecration it was given by the bishop.

Symbolically the altar is often said to represent Jesus Christ, the “cornerstone” of the Church (cf. Ephesians 2:20). During the history of the liturgy the priest would sometimes kiss the altar before blessing the people, symbolizing how the blessing came from God, not the priest.

Additionally, over time relics of saints were inserted into the altar and when the priest kissed the altar, he would be kissing the relics as well.

So while it is true that altars are material objects, they have been set apart for a specific purpose and kissing the altar recognizes its privileged role and relation to the divine sacrifice of Jesus Christ.