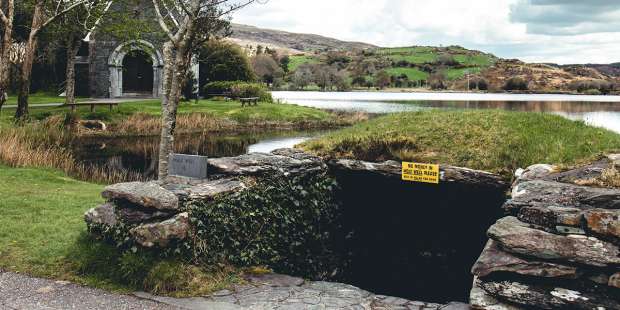 After St. Patrick established a firm foundation of Christianity in Ireland, his successors continued his work and created strong footholds throughout the country. One such missionary was St. Finbarr, who is known for his work in Southern Ireland, particularly in County Cork.

Little is known about his life, but according to Failte Ireland, “St. Finbarr in the 6th century ‘admonished the people to return to Christ, then went on his way to Gougane Barra.’ Since that time, local people … walked the 37 km particularly on the saint’s feast day: 25 September.”

Upon arrival, Finbarr set up a small hermitage on an island on the lake of Gougane Barra, and a miraculous well appeared. Some say that the well was brought about by the prayers of St. Finbarr. However, his solitude was quickly disturbed by a large sea serpent or dragon, and he proceeded to banish it from the location. Local legends claim that the River Lee was created by the tail of the serpent as it ran away from Finbarr.

Interest in this pilgrimage has grown in recent years, and many now call it a “Cork Camino,” connecting it to the ever-popular Camino de Santiago in Europe.

Finbarr is also known as the founder of a different monastery that would quickly attract an entire village of settlers. This settlement would eventually be known as the city of Cork — a center of education and culture in Southern Ireland throughout the centuries.

Even though the life of Finbarr is clouded in legend, his legacy endures to this day.