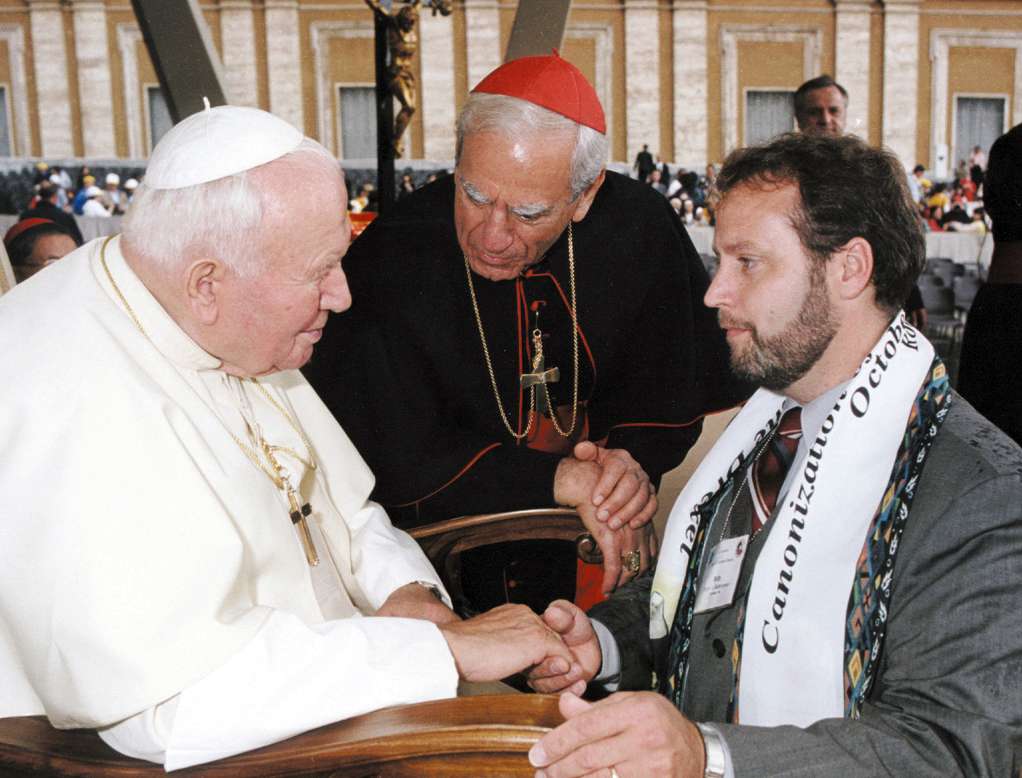 The miraculous healing of Bob Gutherman’s eardrum provided the first of two miracles which led to Katharine Drexel being declared a saint.

St. Katharine Drexel (1858-1955) is founder of the Sisters of the Blessed Sacrament and is known for founding schools and missions to serve blacks and Indians. She was beatified by Pope St. John Paul II in 1988 and canonized in 2000. Bob Gutherman of Bristol Township, Pennsylvania was present for both ceremonies. Not only is he personally devoted to Mother Katharine, but it was the miraculous healing of his eardrum through her intercession which provided the first of two miracles which led to her being declared a saint.

Tell me the story of your healing.

I was 14 years old and in the 9th grade in 1974, when I developed a severe ear infection. I had been to a series of different doctors, who were treating it as a normal ear infection. I was in severe pain. It affected by right ear.

Some of my brothers had done work at the motherhouse of the Sisters of the Blessed Sacrament in Bensalem, Pennsylvania, where we lived. They performed maintenance and janitorial work, and helped out in the library. They had told the sisters that I was not feeling well.

One of my sisters spoke to my mother, telling her “we believe that Mother Katharine is in heaven. We’ll pray to her, and we want you to say this prayer that Bob’s pain will either become more tolerable or go away completely.”

I grew up in a big Catholic family with 11 children. Daily prayer was a way of life. We had dinner together and said the Rosary afterward. So, when the sisters asked us to pray to Mother Katharine, my mother agreed without any hesitation. The sisters prayed along with us.

Not long after, I went into the hospital for an exploratory operation. The doctor told us that there were three bones in the ear that you needed to be able to hear, and two of mine in the right ear had been destroyed by the infection. He said I’d never hear in my right ear again.

A few days later, I told my mother that I could hear fine out of both my ears. The doctor gave me a hearing test and confirmed it.

Was the pain gone?

Yes. It stopped after I had the exploratory operation.

What did the doctor say to this?

I went back for a check-up. The doctor was talking to himself and writing notes. He was saying, “I don’t believe what I’m seeing. Your body is reconstructing its anatomy.”

There had been a lot of damage to my ear, and he expected to do reconstructive surgery. But he told us that if my body continued to heal, he wouldn’t have to. He didn’t.

Did he think it was a miracle?

My mother asked him at the time, “Do you believe in miracles?”

He responded, “When you work with children like I do, you have to.”

She told him that the family had been praying to Katharine, and thought it was a miracle. He responded, “Well, I have no other explanation for it.”

And you told the sisters.

Yes. We went knocking on their door, saying “We have a story to tell you.”

The sister we spoke to listened, and then asked us to write the story down and send it to her. Sometime later, we got a call from our Archdiocese of Philadelphia, wanting us to come in to tell the story again. We were told that an investigation was beginning, looking into my healing as a possible miracle.

The investigation continued for the next 14 years. There was a series of tests and doctors I saw. In Rome, their doctors reviewed the findings. In 1988, it was declared to be a miracle attributed to Katharine’s intercession.

The miracle being that two of the bones in your right ear had been miraculously restored and you could hear normally without any pain.

Yes. My doctor testified that those two bones were gone, and then returned. I mean, say you lost an arm in an accident. Would it ever grow back? No. Well, two bones in my right ear did.

What was your family’s connection to the Sisters of the Blessed Sacrament?

I grew up in Bensalem, Pennsylvania [a Philadelphia suburb], and lived about a mile away from the sisters’ motherhouse. We attended the parish church across the street. My nine brothers and I were altar servers there. Over the years we came to understand who Katharine Drexel was and what she did.

You attended the beatification and canonizations of Mother Katharine in Rome. What do you recall about these visits and meeting Pope St. John Paul II?

It was an honor to be at both, although they were held in two different eras of the pontificate of John Paul II. In 1988, he was a much more vibrant person, full of life and able to move around easily. It was exciting to see him. He had a rock star presence. People were hollering out to him.

I met him a few days before the beatification at his Wednesday audience, and I was full of tears and happiness and excitement. I met him a second time after the beatification in the back of the Basilica; the Swiss Guard gave me a rosary on his behalf. People asked me what he said to me, or I said to him, and I don’t recall. I just remember it was an overwhelming experience.

In 2000, I came to Rome a second time for Katharine’s canonization. He was noticeably frail. He did not move around, but sat in a chair. I was led up to greet him by Cardinal Anthony Bevilacqua, who was Archbishop of Philadelphia at the time. The Pope had nowhere near the vigor he had in 1988.

All these years later, how has this miracle affected you?

It’s been more than 40 years, but thinking about it still gives me the chills. It has given me a clearer understanding of the presence of God. I know that Jesus loves and cares about me, and that He’s still working miracles.