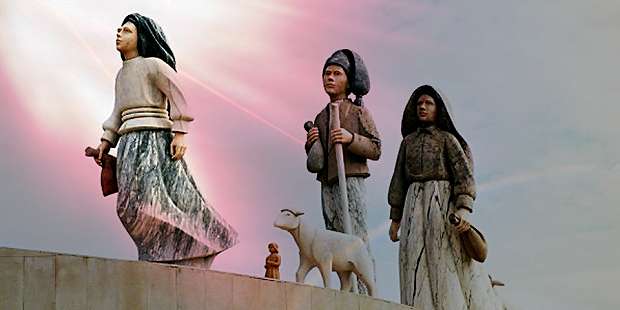 The little shepherds of Fatima described how they felt and the differences between this experience and the apparitions of the Virgin.

A year before the apparitions of Our Lady of Fatima, an Angel appeared to the children. [He identified himself as the Angel of Peace and the Guardian Angel of Portugal.] These apparitions, which took place on three separate occasions in 1916, are considered to be the entryway to the 1917 Marian event at Fatima.

The purpose of the Angel’s three apparitions was to prepare the souls of the three little shepherds—Francisco, Lucia and Jacinta—for the moment when Our Lady would speak to them. Thus, the Angel’s message helps us to better understand this event, especially as we are celebrating the 100th anniversary.

Talking about the Angel’s apparitions, she writes that “the force of the presence of God was so intense, it absorbed us and almost completely annihilated us. It seemed to deprive us even of the use of our bodily senses for a long period of time. During those days, we carried out our exterior actions as though guided by that same supernatural being that impelled us to do them. The peace and happiness that we felt was immense, but wholly interior, as our souls completely concentrated on God. The physical exhaustion that overcame us was also great.”

According to Lucia, the impressions left by Our Lady were “the same interior joy, the same peace and happiness, but instead of this physical exhaustion, a certain expansive agility; instead of this annihilation in the Divine presence, an exultant joy; instead of difficulty when speaking, a certain communicative enthusiasm.”

The angel leaves 7 strong impacts on the soul and senses of the children:

•• The words of the Angel are firmly engraved in the minds of the little shepherds;

•• With the appearance of the Angel, the supernatural atmosphere is intense and the presence of God is intimately felt;

•• The manifestation of the Angel has physical effects;

•• The Angel communicates truths to them without needing to transmit them verbally or expressly;

•• The presence of the Angel reveals unequaled beauty;

•• They experience interior joy and peace.

Words of the angel

1. At the time of the Angel’s apparitions, Jacinta was 6 years old, Lucia was 11, and Francisco was 8. Nonetheless, the words of the Angel were “so impressed upon our minds, that we never forgot them” (from Lucia’s memoirs).

This effect or impression that Sister Lucia describes is of great importance for understanding and appreciating the way angels act on human beings: they illuminate people’s minds, and at the same time strengthen them; and this strengthening happens with the mere presence or proximity of an angel.

Along these lines, Saint Thomas Aquinas uses the following example: “What is less hot is made hotter by the presence of what is hotter; so the intellectual power of an inferior angel is strengthened by the superior angel turning to him” (S. T., I, q. 106, a. 1)

2. The supernatural atmosphere is intense and the presence of God is intimately felt. Regarding the Angel’s first appearance, Sister Lucia remembers that “the supernatural atmosphere that enveloped us was so intense, that for a long period of time we became nearly unaware of our own existence, remaining in the same posture in which the Angel had left us in, constantly repeating the same prayer.

“The presence of God was so intensely and intimately felt, that we didn’t even venture to speak to each other. The next day we still felt our soul enveloped in that atmosphere, which only dissipated very gradually.”

Something similar happens with the second apparition, regarding which Lucia mentions that the Angel left them in a “supernatural environment.” During the third apparition, in which the little shepherds were transported by supernatural power… “the strength of God’s presence was so intense, that it absorbed us and almost completely annihilated us.”

This impression leads us to understand that a guardian angel is not a “cute little angel,” such as artistic renditions at times would like to make it seem. Angels are powerful personages, and we ought to have an attitude of respect and reverence before them, because they bring us God’s presence, and act as God’s representatives.

Angels are the image of light, because they are immersed in God’s light, which they contemplate; therefore, the strength that angels transmit is the strength of Goodness and of Love, which at the same time enables us to do all good things.

Similarly, the presence of holy angels brings with it the consequences of God’s influence over all of creation and over each creature in particular, especially over human beings.

3. The manifestation of the Angel has physical effects. In various places, Lucia narrates this fact, saying that after the apparition, they continued in the same posture in which the Angel had left them, and it was not easy for them to talk about it freely. (How different from so many authors and speakers who write and talk about angels without any foundation in the teachings of the Church!)

The following dialogue, reported by Lucia, is revealing:

“When we talked about the Angel, I don’t know what it was that we felt.

“Jacinta said: ‘I don’t know what I feel. I cannot talk, nor sing, nor play, nor do I have strength to do anything.’

“‘I don’t either,’ Francisco replied. ‘But, what does it matter?’ The Angel is much more beautiful than all of that. Think about him.’”

During the third apparition, the presence of the supernatural was much stronger still. For many days, Francisco didn’t even venture to speak. Later, he said,

“Seeing the Angel made me very happy; but the bad thing is that afterwards we aren’t able to do anything. I couldn’t even walk. I don’t know what was wrong with me.”

This effect shows us that an angel never demands something for himself; he doesn’t want us to fall into superficiality or secondary details. Angels always lead us to God, and do so with all of their strength, in order to orient us towards the essential: God.

The true, authentic presence of angels brings us simplicity with no room for extravagances or resounding words without meaning or content. They convey no complicated concepts of God, but rather inspire us to humble and strict obedience.

The angels recognize the importance of being silent, because through silence we can recognize the value of time and our responsibility for every word we say.

4. The Angel communicates truths to them without needing to transmit them verbally or expressly. During the second apparition, in which the Angel showed Lucia, Jacinta and Francisco the value of sacrifice, they not only understood this value, but also comprehended “who God was, how he loved them and wanted to be loved, the value of sacrifice, and how the latter was pleasing to Him; how, in response to sacrifices, He converted sinners.”

According to what was said in the first of these points, angels can enlighten and strengthen human understanding, but looking at the current point we see that angels also raise up human knowledge towards the things of God.

5. The presence of the Angel reveals an unequaled beauty. The Catechism of the Catholic Church, number 330, affirms that angels reveal the splendor of God’s glory. In the book of Exodus 23:21 we read that these spiritual creatures carry the name of God within them.

6. The Angel inspires them to follow his example. During the different apparitions of the Angel, the little shepherds repeat the gestures and words of the Angel: they assume the same posture (kneeling on the ground), and they recite the prayers the Angel teaches them. Angels can be considered private tutors that each person has on the path to holiness. Thus, we must repeat what they teach us, and not merely mechanically; it has already been mentioned that when angels enlighten, strengthen, and elevate our understanding, they also influence our will by showing us what is good.

7. They experience interior joy and peace. In fact, these are aspects of a proper discernment of spirits: the devil leaves us full of sadness and worry, whereas holy angels leave us with a feeling of happiness and peace, because they lead the soul to what is good, to love of God and union with Him.

Thus, the apparitions of the Angel in Portugal are a valuable catechesis regarding the powerful role of our guardian angel in our lives and in our growth in holiness.