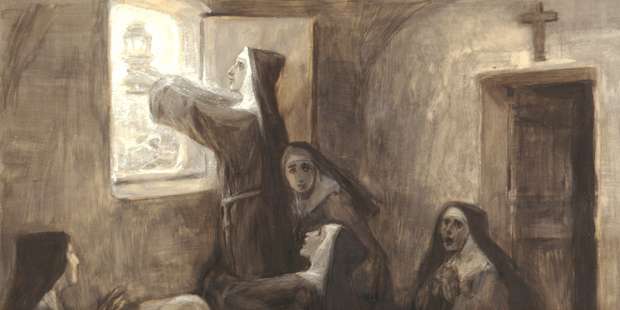 What is it about Catholicism? Universality, to start…

We often talk about how things are alike. We also hear praise of diversity as if it were of the highest worth. Often today, however, diversity is an expression of finding no underlying agreement about basic principles. Thus, it becomes a form of skepticism. All men are indeed created equal, but, if you look at them one by one, no one looks exactly alike. Yet, each one has a body, hands and feet, unless lost in some accident.

Thus, if we think about it, were everything exactly like everything else, we would not be able to tell one thing from another. Everything would blur into one undistinguishable mass. If we say that all nations or all religions are exactly alike, we will be surprised when we investigate them to see how different they are. It is something like St. Paul’s telling us that the foot is not the hand. To make it so or think that they are the same, would mean that we really did not have a body which, to be what it is, requires different parts doing different things yet belonging together for the action of the whole being of which they are parts.

What I want briefly to ask here is this: What is distinct about Catholicism, a faith that, while unique, is intended to be universal?

Its most obvious distinguishing mark in the public order is probably the position of the papacy. Catholicism is that religion in which a pope is a sign of its unity and governance. Recent popes have in fact been quite visible world figures. But the pope is an authority who is part of the whole of the Church. He is not the Church, but the Church, as it was founded, is not complete without this functioning office.

In that sense, the papacy is the oldest continuing organization in the world. There are older civilizations or cultures like the Chinese or the Jews. The latter’s endurance is probably not unrelated to the same reason the papacy continues. But no office is quite like the papacy in its preservation over time as an organized unity.

Now Catholics are not surprised at this continuity. Most have heard of the passage about the Gates of Hell not prevailing against the Church, though this does not necessarily mean that the Church will always prosper or always succeed in its mission in every locality. Nor does it mean that people will not break away from its unity at times.

Its mission, indeed, was to “go forth and teach all nations,” teach them not the authority’s own opinions but what the Lord sent them to teach. The Church is a body in which basic things are passed down unchanged, because, I think, nothing is found that is better.

Obviously, this founding mission is far from complete. The Church over the centuries has at least some presence in most lands of the world, even if, often enough, it exists under stress, civil sanctions, or persecution as we see in the Middle East, and even here of a different kind in America today. The Church was warned that this would likely be the case. We should not be too surprised by it, but take this opposition as a sign of the Church’s being what it was expected to be.

But in a broader sense, Catholicism is not distinct just because it has a pope to whom, with the bishops, its unity over the ages is entrusted. One of the fundamental things about Catholicism is what it holds to be true. And what makes Catholicism distinct from most other Christian sects and other religions or philosophies is that it considers itself to be solidly grounded in reason. Its “faith” is not opposed to or a substitute for reason.

The word “reason,” to be sure, can be defined in ways that are not accurate, complete, or sometimes not even “reasonable.” Revelation, as Catholics understand it, was not, like Islam or many modern ideologies, designed to explain everything we needed to know. Indeed, if we had no way independently to examine whether what it held was credible or not, we could not really accept this revelation as plausible. So we have minds and we are supposed to use them especially in our understanding of Catholicism.

Catholicism maintains that revelation was directed to men’s lives and also, through them, to their minds. That is, they can understand basically what it was that God wanted them to know and do over and above what they understood from their own reason. Revelation was intended to be true and to be known as true. Christ identified Himself precisely as the “truth.”

This revelation sought to explain certain basic truths to man about himself, the world, and God. These new truths were ones that men could not know by their own rational powers. On knowing what was revealed, man was left the task to figure out why what was given to him in revelation was not unreasonable. Catholicism is essentially the bearer of the fullness of this revelation from God to men. It does not claim that outside its sphere, no truths exist. It does insist that, if they are contrary to reason or revelation, they cannot be true. To live contrary to reason and revelation affects our lives.

But why would God bother with human beings? There have been a lot of them from the eons of man’s beginning on this planet—some estimate about 90-100 billion. Men have also proved to be a pretty recalcitrant lot. Wars and rumors of war have been recorded from the beginning, as well as constant vices of various kinds.

The Person of Jesus

The answer to this question of Catholicism’s difference takes us to the heart of Catholicism’s unique features. First of all, Catholicism, even though it has doctrines and can provide reasons for its peculiar existence and beliefs, is not just a system of beliefs or ideas. It is an encounter with a Person.

This Person is identified as one Jesus Christ, who lived a certain number of years in Roman Palestine. What we know about Him was essentially recorded in what we know as the New Testament. He was in fact the Son of God, the startling truth that the cause of the existence of everything came from God and was God. When this incarnation took place, the world became both different and defined as to what human life in this world ultimately was about.

This Christ did not come to explain about politics or physics, at least not directly. He figured that we could learn about these things with our own powers. He came essentially to save us from our sins so that we could reach the purpose for which we were created in the first place. Sins meant some chosen disorder of our soul by which we implicitly rejected the purpose of our creation.

And what was this purpose and what did it mean? No human person, indeed no existing thing, caused either its own existence or what it was to be itself. Our very being witnesses to an origin outside of ourselves. The ultimate dignity of each person lies in the fact and nature of what he is. In the beginning, God first intended to create other beings who could participate in His inner Trinitarian life, in which the Word, the Son was the reflection of His Father.

These beings were not themselves gods, but they had to be able freely to accept God’s offer to participate in His inner life as their own good. This capacity is the origin of our rationality, and hence the origin of our possibility to reject this offer. What in fact happened—this is what Genesis is about—man did reject this gift beyond his nature of participating freely in the inner life of the Godhead—Father, Son, Spirit.

God’s response to this rejection was a counter initiative that would still leave man free to accept or reject what God provided as an alternative to His original purpose. We call this the Redemption. It was effected by the passion, death, and resurrection of Christ and His leaving us a Church in which His sacrifice is still present.

Thus, what God is primarily concerned with is not some inner-worldly polity or organization in which we will be happy for a time in this life. He is concerned with our ultimate status, that is, whether we choose eternal life. However, we make this choice in the context of our daily lives in this world, what we believe, how we live.

This schema is what is distinct about Catholicism. It explains to us what we are by explaining to us who God is. Having so informed us what we need to know, we are left with the choice of accepting or rejecting what we are. This accepting or rejecting is the real drama of human life that initially takes place in the realms of this earth, but whose consequences are always in the everlasting, so important does God consider each of us to be.