As the Christmas season approaches, the hit-making community of Benedictine nuns based in Missouri have released an album full of carols with which to greet the newborn Christ.
“Our greatest hope is that these songs will truly ‘life up our hearts’ to the Infant King, so that we will always be mindful of His humility and mercy,” Mother Cecilia, prioress the Benedictines of Mary, Queen of Apostles, told CNA.
The community’s new album, Caroling at Ephesus, was recorded in September, and recently released. It can be purchased from the nuns’ website at: https://music.benedictinesofmary.org/. Digital versions of the album are available from Amazon and iTunes.
“This is one season in which there is such an abundance of music, the only difficulty was in choosing which songs to include on this album,” Mother Cecilia said. “We decided to use many on the lighter side – pieces we would sing around the fire during one of the twelve days of Christmas. They are still sacred in nature, no ‘Frost the Snowman’ or anything, but include beautiful carols from around the world.”
Sales of Caroling at Ephesus will go toward building a new priory church for the rapidly-expanding community.
“The chapel we have been using for the last several years has served us well. But unfortunately, it is not growing with us,” Mother Cecilia explained. “Five years ago, there were 18 Sisters, and with the addition of four more postulants on December 5th, our number will reach 31, with at least two more young women slated to join by next fall. Very soon, there will be  neither room for Sister nor guests, who are coming with more and more frequency to our monastery.”
She added that the priory is now attracting vocations from outside the United States, including Canada, Germany, and the Netherlands.
The album includes 24 songs, in six languages: “most of the pieces are in English, but there are two in Latin, and one each in German, French, Polish and Spanish.”

“Along with a little help from  my mother, who is Polish by birth, there are enough speakers here of each language now to guide us through the pronunciation. While Latin is easy (we chant in Latin everyday) the others certainly added a challenge to the recording, as we have not ventured into recording any other language before,” she added.
Mother Cecilia said that “Among the more recognizable songs are What Child is This, Good King Wenceslaus, Ukrainian Bell Carol, God Rest Ye Merry Gentlemen, O Holy Night, and O Come All Ye Faithful. It was surprising to find out how old some of these carols actually are. We had a lot of fun trying out new arrangements to these carols, and perk up some others we have been singing for many years.”
In Addition, the album features an original track: a Christmas poem written by G.K. Chesterton, “Carol of the Christ Child”, was set to music by the nuns themselves.
Though the community practices limited enclosure, their music albums have brought them international renown and popularity – they have been Billboard’s Best-Selling Classical Traditional Artist several years in a row, and their albums have topped Billboard’s Top Traditional Classical Albums.
Life in the community is marked by obedience, stability, and “continually turning” towards God. They have Mass daily according to the extraordinary form, and chant the psalms eight times a day from the 1962 Monastic Office.
The nuns also support themselves by producing made-to-order vestments, as well as greeting cards. 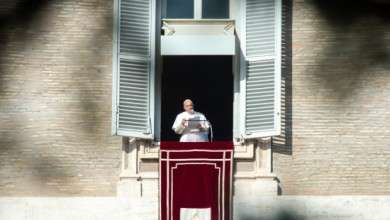 Pope at Angelus: We all lose our patience, even me

How will Pope Francis celebrate his 80th birthday this year?