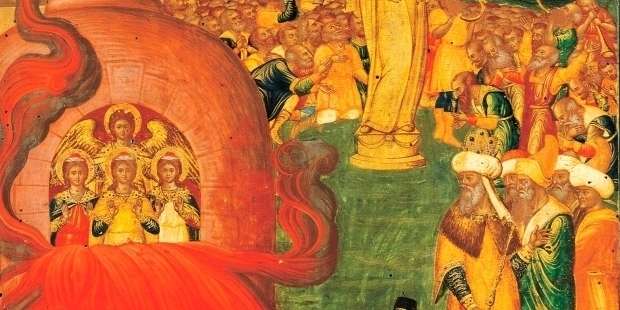 To trust like the men in the fiery furnace; to surrender in hope is the goal

“Perhaps God will save us. But it’s his choice…” The age may be challenging us to such heroic faith

If our God, whom we serve, can save us from the white-hot furnace and from your hands, O king, may he save us! But even if he will not, you should know, O king, that we will not serve your god or worship the golden statue which you set up. -Daniel 3:17-18Now my soul is troubled. What shall I say: Father, save me from this hour? But it is for this very reason that I have come to this hour. Father, glorify your name! -John 12:27-28

The Bible is filled with moments of courage and triumph,  scenes that fill our hearts with awe and a sort of holy pride when we consider them. There’s Judith cutting off the head of Holofernes, Elijah calling down fire from heaven on his sacrifice, Gideon destroying Midian with only 300 men. But I don’t know that there’s any moment in Scripture that’s fiercer than Shadrach, Meshach, and Abednego’s absolute disdain in the face of an agonizing death.

Nebuchadnezzar has ordered that they defy the law of God, worshiping an idol. When they refuse, he prepares to throw them into a white-hot furnace. As in the stories of most martyrs, they’re given a choice: turn from God or die.

When Christian martyrs are given this choice, it’s almost understandable that they embrace their death; after all, God himself has been unjustly executed.The sure promise of eternal joy lies before them. So while it may not be easy by any stretch of the imagination, the choice is simple.

These three men don’t have the benefit of Christian theology. They haven’t been raised with the images of glorious martyrs always before their eyes. They may not even know that death will lead to eternal life. All they know is that sin is worse than death. So when they’re offered a way out, they scoff.

“Perhaps God will save us. But it’s his choice. Whether he wants to or not, it doesn’t make any difference to us. We won’t turn our backs on him.”

This is the level of trust I long for: complete surrender to God, whatever his will might be. I want to hate sin so much that I react to temptation with this level of disdain.

But more than that, even, I want to unite with Christ in this passage of the Gospel of John, thanking God for the opportunity to suffer. This is John’s version of the Agony in the Garden, though it happens in the upper room. It’s the moment where Jesus confronts his fear and dread and chooses the will of the Father. He acknowledges the suffering he’s enduring (though “troubled” might be rather a euphemism) but he will not pray to be released because he knows that his suffering has purpose. Instead, he prays that God’s name would be glorified.

I have a lot of Scripture passages that I pray in difficulty. I’ve got a whole list of verses that keep me going when I’m miserable. But when life seems impossible, this is the verse I go to more than any other. Jesus knew what the Father was going to do, but ultimately that doesn’t make any difference. The reason he submits isn’t because he knows that his suffering will only be temporary and will win souls. He submits because it’s the Father’s will.

There are all kinds of explanations for the existence of suffering in a world ruled by a good God, books and websites and arguments explaining how God works good out of evil. But most of the time when I’m suffering, those don’t help. It’s good to know that theologians have adequate responses to the problem of evil, but what I need isn’t a philosophical proof but a Father. And my Father has called me to leave everything in his hands, to stand with the three men outside the fiery furnace and Jesus in the Garden and Job who cries out in an agonized attempt to trust, “Though he slay me, still will I trust in him!” (Job 15:13)

This is why I’ve tried to stop analyzing God’s plan. When things go wrong, big or small, I say, “Jesus, I trust in you”—even when I don’t. I say, “Father, glorify your name” even when I’d much rather he glorified mine. I say the right things because I want to mean them. And I trust that eventually I will, though it might take more than a few fiery furnaces to teach me that God is trustworthy. Fortunately, I’m surrounded by a cloud of witnesses who learned to trust even to the point of death. All you holy martyrs, Saints of God, pray for me!