Three centuries after reviving devotion to the Sacred Heart of Jesus, the French visionary was canonized on May 13, 1920.

In 1673, a French Visitandine (Visitation) nun named Margaret Mary Alacoque had visions of Jesus, wherein he asked the Church to honor his Most Sacred Heart.While devotion to the Heart of Jesus was an ancient one, tracing its roots to the first few centuries of Christianity, it was not widespread, and it wasn’t until Alacoque’s private revelations were approved by the Church that it caught on like wildfire.

Her revelations weren’t immediately accepted and it took nearly three centuries until the Church canonized St. Margaret Mary, waiting until May 13, 1920.

Despite all the delays in official Church approval, the messages of her privates revelations were extremely popular. One of the reasons was because the words and images of Jesus in her visions spoke of God’s passionate love for humanity.

For example, St. Margaret Mary recounts what happened during the first vision.

Once being before the Blessed Sacrament and having a little more leisure than usual, I felt wholly filled with this Divine Presence, and so powerfully moved by it that I forgot myself and the place in which I was. I abandoned myself to this Divine Spirit, and yielded my heart to the power of His love. He made me rest for a long time on His divine breast, where He discovered to me the wonders of His love and the inexplicable secrets of His Sacred Heart, which He had hitherto kept hidden from me.

Then Jesus spoke to St. Margaret Mary as she lay near to his heart.

My Divine Heart is so passionately in love with [humanity] that it can no longer contain within itself the flames of its ardent charity. It must pour them out by thy means, and manifest itself to them to enrich them with its precious treasures, which contain all the graces of which they have need to be saved from perdition.

Furthermore, Jesus revealed himself with his heart outside of his body. This symbolizes how Jesus could not contain his love for us and his heart literally burst through his chest, a symbol of his passionate love.

Jesus also made certain “promises” to St. Margaret Mary for those who are devoted to his Sacred Heart, “In the excess of the mercy of my heart, I promise you that my all powerful love will grant to all those who will receive communion on the First Fridays, for nine consecutive months, the grace of final repentance: they will not die in my displeasure, nor without receiving the sacraments; and my heart will be their secure refuge in that last hour.”

The revelation of Jesus’ Sacred Heart to St. Margaret Mary is a great reminder to us, dispelling any false images of God we may have. He is not a distant God, trying to destroy us, but a lover, who desires our souls, hoping to fill them with his joy.

As the Church celebrates 100 years since the canonization of St. Margaret Mary, we should reflect on various images of God that we have and consider how Jesus extends his heart to us, wanting us to rest upon it.

Saint Peter and the Eastern Orthodox 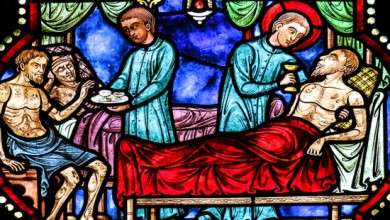