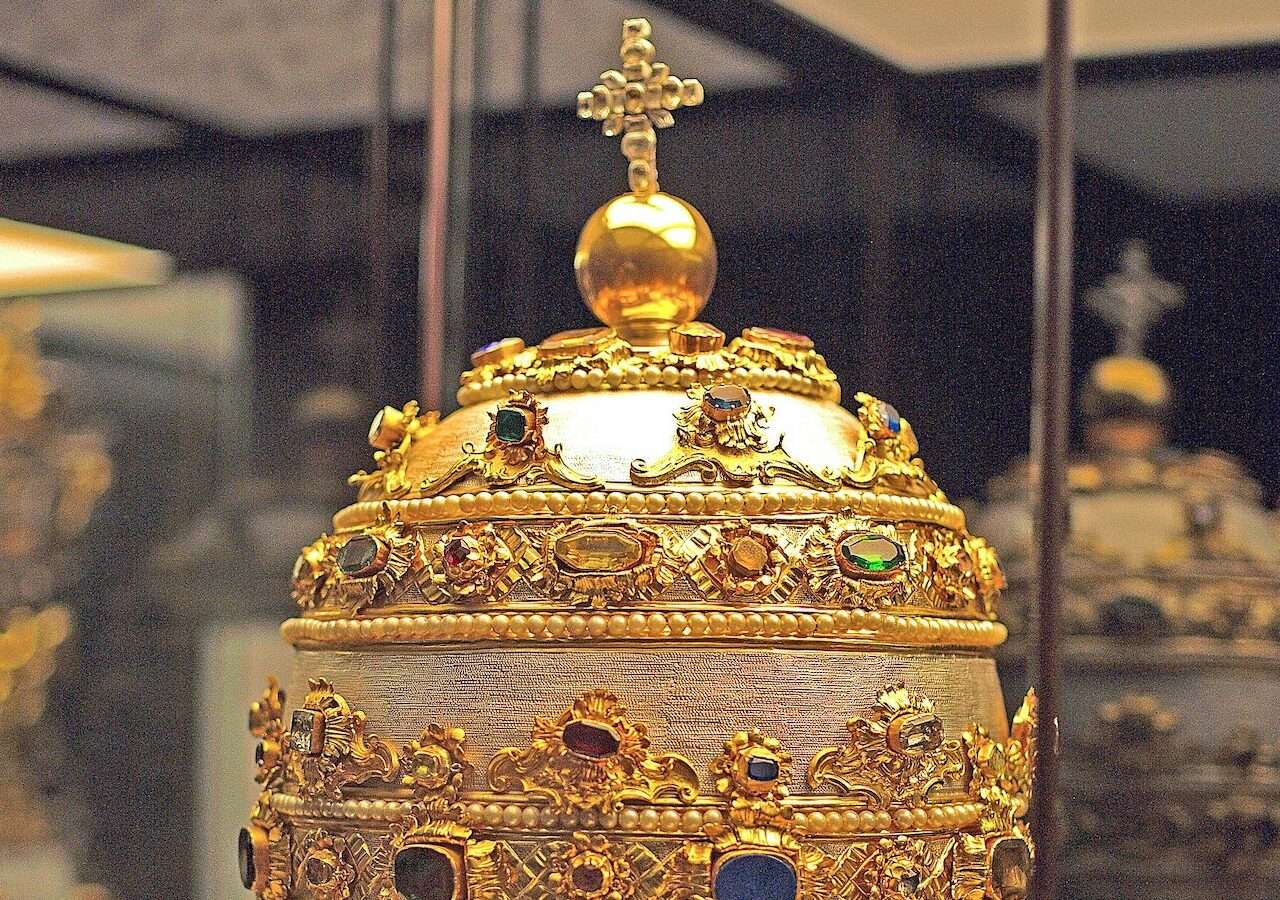 We are all familiar with the special trappings worn by royalty, but we are not so familiar with the regalia of the Papacy. This is a list of the top 10 items of papal regalia, most of which are still in use today.

A red papal cope, worn with a mitre by Pope Benedict XVI

The mantum or papal mantle differs little from an ordinary cope except that it is somewhat longer, and is fastened in the front by an elaborate morse. In earlier centuries it was red in colour; red, at the time being the papal color rather than white. In the eleventh and twelfth centuries the immantatio, or bestowal of the mantum on the newly elected pope, was regarded as specially symbolical of investiture with papal authority: Investio te de papatu romano ut praesis urbi et orbi, “I invest thee with the Roman papacy, that thou rule over the city and the world” were the words used in conferring it at the Papal Coronation. The use of the mantum by the popes ceased under Paul VI, following the reforms of Vatican II. This is the first of the traditional papal vestments restored by the current Pope, Benedict XVI. In the image above we see Pope Benedict XVI wearing the mantum. [Wikipedia]

Pope Benedict XVI wearing a red cappello romano during an open-air Mass in 2007.

A cappello romano (literally Roman hat) or saturno (because it is reminiscent of the ringed planet Saturn) is a hat with a wide, circular brim and a rounded rim worn by Catholic clergy. It is made of either beaver fur or felt, and lined in white silk. Unlike many other articles of ecclesiastical attire, it serves no ceremonial purpose, being primarily a practical item, worn in private life. The pope wears a red cappello with gold cords. Cardinals formerly also had the privilege of wearing a red cappello, but this rule was overturned by Paul VI, and now Cardinals’ cappelli are black, as are those of all other clerics. [Wikipedia]

In the image above we see Pope Julius II. This is another tradition restored by Benedict XVI. Papal camauros are of red wool or velvet with white ermine trim and are worn, usually in winter, in place of the zucchetto, which in turn takes the place of the biretta worn by other members of the clergy. Like the biretta (priest’s hat) worn by lower clergy and the mortarboard worn by academics, the camauro derives from the academic cap (the pileus), originally worn to protect tonsured clerical heads from the cold. It is often worn with a shoulder winter cloak (mozzetta), also sometimes fur-lined. The papal camauro fell into disuse after the death of Pope John XXIII in 1963, but it was revived in December 2005 by Pope Benedict XVI. [Wikipedia]

The Papal Slippers are a historical vestment of the Roman Catholic Church traditionally worn by the pope. They are a form of episcopal sandals worn by early bishops. Red in color to symbolise the blood of the martyrs, the slippers altogether symbolised the submission of the pope to the ultimate authority of Jesus Christ. Pope Paul VI discontinued their use in favor of the outdoor red papal shoes. Pope Benedict XVI has chosen to wear the red papal shoes, similar to those worn by Paul VI. [Wikpedia]

In the photo above we see Pope John XXIII wearing the fanon. The fanon consists of a doubled shoulder-cape (somewhat like a mozzetta) of white silk ornamented with narrow woven golden stripes, so that the colors alternate white and gold. The pope wears it only when celebrating a solemn Pontifical Mass, that is, only when all the pontifical vestments are used. The manner of putting on the fanon recalls the method of assuming the amice universal in the Middle Ages and still observed by some of the older religious orders. [Wikipedia]

The Pallium or Pall (derived from the Roman pallium or palla, a woollen cloak) is an ecclesiastical vestment in the Roman Catholic Church, originally peculiar to the Pope, but for many centuries bestowed by him on metropolitans and primates as a symbol of the jurisdiction. The modern pallium is a circular band about two inches wide, worn about the neck, breast and shoulders. It has two pendants, one hanging down in front and one behind, which are about two inches wide and twelve inches long, and are weighted with small pieces of lead covered with black silk. The remainder of the pallium is made of white wool, part of which is supplied by two lambs presented annually as a tax by the Lateran Canons Regular. [Wikipedia]

The sedia gestatoria is the portable throne on which Popes were once carried. It consists of a richly-adorned, silk-covered armchair, fastened on a suppedaneum, on each side of which are two gilded rings; through these rings pass the long rods with which twelve footmen (palafrenieri), in red uniforms, carry the throne on their shoulders. The Sedia gestatoria is an elaborate variation on the sedan chair. Two large fans (flabella) made of white ostrich feathers—a relic of the ancient liturgical use of the flabellum, mentioned in the Constitutiones Apostolicae, VIII, 12—are carried at either side of the sedia gestatoria. In the picture above, we see Pope Pius XII on the throne. [Wikipedia]

Above we see Pope Saint Sylvester I carrying the traditional Papal cross. The practice of Popes carrying a Crosier (shepherd’s crook) was gradually phased out and had disappeared by the time of Innocent III’s papacy in the eleventh century. In the Middle Ages, popes would carry a three-barred cross (one more bar than on those carried before archbishops), in the same manner as other bishops carried a crosier. This was in turn phased out, but Paul VI introduced the modern papal pastoral staff, which instead of the triple cross depicts a modern rendition of the crucified Christ, whose arms are fixed to a crossbar that is curved somewhat in the manner of an Eastern crozier. [Wikipedia]

2. Ring of the Fisherman

The Ring of the Fisherman, also known as the Piscatory Ring and the Pescatorio (in Italian), is an official part of the regalia worn by the Pope, who is described by the Catholic Church (of which he is the head) as the successor of Saint Peter, who was a fisherman by trade. A new ring is cast in gold for each Pope. Around the relief image is the reigning Pope’s Latin name in raised lettering. During the ceremony of a Papal Coronation or Papal Inauguration, the Dean of the College of Cardinals slips the ring on the fourth finger of the new Pope’s right hand. Upon a papal death, the ring is ceremonially crushed in the presence of other cardinals by the Camerlengo, in order to prevent the sealing of backdated, forged documents during the interregnum, or sede vacante.

The Papal Tiara (Triregnum) is the three-tiered jewelled papal crown, supposedly of Byzantine and Persian origin, that is a prominent symbol of the papacy. The Supreme Pontiff’s arms have featured a “tiara” since ancient times, notably in combination with Saint Peter’s crossed keys. Though not currently worn as part of papal regalia (though still permissible), the continuing symbolism of the papal tiara is reflected in its use on the flag and coats of arms of the Holy See and the Vatican. Although often referred to as the Papal Tiara, historically there have been many, and twenty-two remain in existence. [Wikipedia]