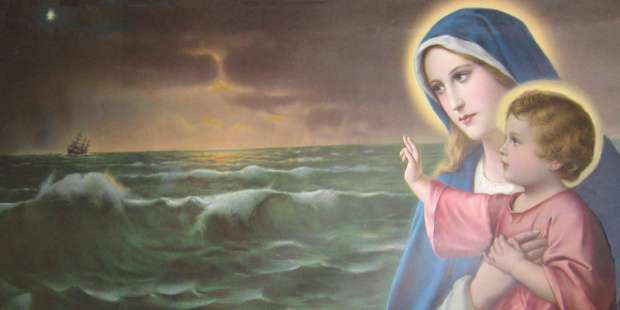 The spiritual meaning of the Virgin Mary’s name

The Blessed Mother was named “Mary,” a significant name in the ancient world.

After her birth (celebrated liturgically on September 8) the parents of the Blessed Virgin Mary decided to name their newborn child, “Mary” (her naming is celebrated on September 12). They did so cooperating in God’s divine plan, giving her a name that would be invoked for all eternity.

Similar to other biblical names, the name “Mary” is not without meaning and has a host of spiritual connections.

First of all the Hebrew form of Mary is miryam and some biblical scholars have seen in it the Hebrew words mar (bitter) and yam (sea). This first meaning can refer to Mary’s bitter suffering at the cross and her many tears of sorrow.

Another interpretation of the word mar renders Mary’s name to mean “drop of the sea” and St. Jerome rendered it in Latin as stilla maris, which was later changed to stella (star) maris. This accounts for a popular title for Mary as “Star of the Sea.” Mariners at the time were accustomed to looking at the stars to find guidance and to discern which direction they were going and so calling Mary stella maris referred to Mary’s ability to guide sinners along the path to Eternal Shores.

Yet another rendering of miryam focuses on the Hebrew word mari and sees in it the word “mistress” or “lady,” thus making Mary “Lady of the Sea.”

St. Bonaventure took all of these meanings and combined their symbolism, giving each one its own spiritual meaning.

St. Thomas Aquinas also related similar symbolism, “Mary means Star of the Sea, for as mariners are guided to port by the ocean star, so Christians attain to glory through Mary’s maternal intercession.”

While the exact etymology is still debated among scholars, the Church has traditionally accepted these saintly interpretations and regards Mary as the “Star of the Sea,” to whom we all look up, and strive to follow during the tempest here below.

Below is an ancient hymn to Mary called Ave Maris Stella dating back to the 8th century — a perfect summation of Mary’s role according to the meaning of her name.

Taking that sweet Ave,
Which from Gabriel came,
Peace confirm within us,
Changing Eva’s name.

Break the captive’s fetters,
Light on blindness pour;
All our ills expelling,
Every bliss implore.

Show thyself a Mother;
May the Word Divine,
Born for us thine Infant,
Hear our prayers through thine.

Virgin all excelling,
Mildest of the mild;
Freed from guilt, preserve us
Pure and undefiled.

Keep our life all spotless,
Make our way secure,
Till we find in Jesus,
Joy for evermore.

Through the highest Heaven
To the almighty Three,
Father, Son and Spirit
One same glory be. Amen.