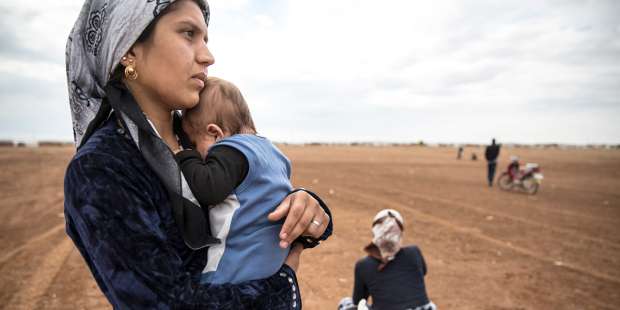 Turkish clash with Kurds could result in exodus of Christians, says Catholic bishop

In an interview with Aid to the Church in Need, the Syrian-Catholic bishop says Christians will suffer the consequences of a conflict.

“As always, everyone has their own interests, but it is we Christians who will suffer the consequences.”

Speaking with profound bitterness, Emeritus Archbishop Jacques Behnan Hindo, Syrian-Catholic of Hassaké-Nisibis in the Kurdish area of Syria, was commenting to Aid to the Church in Need on the news coming from the border between Syria and Turkey. Two Christians were allegedly killed in an attack that took place yesterday in Qamishli.

“It was not clever to move from the Kurds, it was clear that no one would help them.”

“I invited them to desist from their plans,” he said. “They believe they have the right to an autonomous region as there is an Iraqi Kurdistan and a Turkish one. But the Kurdish population in those areas of Syria is just 10%. They are also people who came as asylum seekers after 1925, who have Turkish or Iraqi nationality. They have no right.”

The bishop is convinced that the Kurds will lose the clash with Turkey, especially due to the lack of support from the United States and other Western forces.

“It was not clever to move from the Kurds, it was clear that no one would help them. Now they will lose everything, as happened in Afrin,” he said.

Christians are likely to emigrate

At the present time the thoughts of Archbishop Hindo are with the 5,000 families of the Diocese of Hassaké-Nisibi.

“In recent days, many had already moved from the border towns to Hassaké. Now the conflict has become even more serious and I fear that many will emigrate. Since the beginning of the war in Syria, 25% of the Catholics of Qamishli and 50% of the faithful of Hassaké have left the country, along with 50% of the Orthodox from both, Qamashli and Hassaké. I fear a similar exodus, if not a greater one,” he told ANC.

The conflict could unleash forces of ISIS

There is also great concern about the high numbers of ISIS-linked fighters in the area.

“I learned that the Chirkin prison, where jihadists from the Islamic state are being held, had apparently been hit. What was the point of that? That way the great majority of them will now be free. This is a plan to destroy Syria and not only Syria. Now the terrorists will also arrive in Europe, through Turkey and with the support of Saudi Arabia,” he said.

Monsignor Hindo also called upon the international community to acknowledge its responsibilities.

“The United States, Italy, France, the United Kingdom and Germany should all offer their own mea culpa. They acted in Syria for their own interests, hiding behind the ideals of freedom and democracy. Instead, they have done nothing but weaken our country, at the expense of its own people. Why don’t they fight for freedom and democracy in Saudi Arabia? “