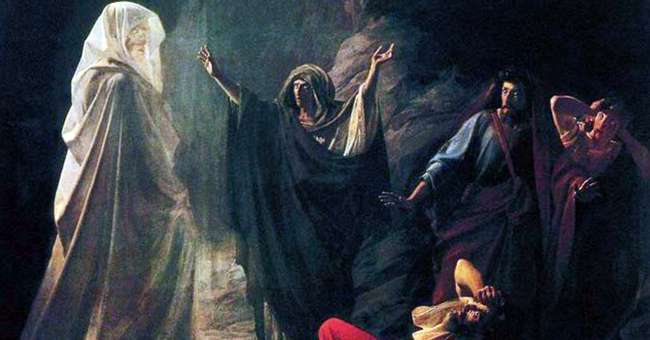 Two Exorcists Weigh In On Ghosts and Haunted Houses

Fearful that her deceased ex-husband was haunting her, a woman went to see Fr. Vincent Lampert, the exorcist for the diocese of Indianapolis, Indiana. Ever since her ex-husband’s death, there were strange goings-on in his old favorite room.

The woman lived alone so when she found furniture moved around, there was no one to blame.  It was especially unnerving that an old wedding picture kept showing up on a table.  She would put it away only for it to later show up on the table again—sometimes face up, sometimes face down.

The marriage had ended because of infidelity.  When the man announced he was leaving for another woman, the wife had told him: “Rot in hell!”

Time passed and the man developed a terminal illness.  Before his death, he repented of the adultery and asked for his wife’s forgiveness. “Rot in hell!” was her response.  She had no intention of forgiving him for the intense pain he had caused her and for destroying their marriage.

But now, after his death, it seemed he was making his presence known to his ex-wife.  Was he haunting her out of revenge?  Or was he actually in hell now and somehow punishing her?

After assessing the situation, Fr. Lampert believed that the man was in purgatory and in need of prayers. God was allowing him to make his presence known to his ex-wife.  “I convinced her to forgive him,” Fr. Lampert said. “I prayed for him together with her and everything stopped.”

Demons or Souls in Purgatory?

It’s not the first time Fr. Lampert had encountered such hauntings. “I have celebrated Masses in locations where these types of things happen and that usually takes care of it,” he said.  “During the Mass, when we pray for the person and everything becomes quiet, then we know this is what was needed.”

Does that mean that haunted houses are real?  The spate of ghost hunter TV shows, movies, and books has been capitalizing on this notion. Many people do not believe in haunted houses while others blame them on activity from the devil.  But is there such thing as a friendly ghost?

“I believe that souls can act in this reality if they are in need of prayer and God permits it,” Fr. Lampert said.  How, though, can we know if it is a soul in purgatory causing mysterious activity in a house or if is it the work of the devil?   “If everything becomes silent when we begin praying, then it’s a soul in purgatory,” Fr. Lampert said.  “If it’s evil, things will become more turbulent because a demon is being tormented by the prayer.”

Many people have come to Fr. Lampert reporting strange things happening in their homes.  “If it’s a soul that’s trapped, it’s seeking prayers and trying to get people’s attention,” he explained.  “It needs those prayers to move on to where it needs to be.”

Before acting in a haunted house situation, Fr. Lampert said that he will investigate and spend time in prayer.  “I’m usually pretty cautious before I agree to celebrate a Mass,” he said. “I would say prayers to drive away evil but not hold a Mass. I don’t want anything to happen that could profane the Eucharist.”  He explained that during an exorcism, if a demon manifests, the priest must take great care to protect the Eucharist.

Father Patrick, (not his real name) is a parish priest and unbeknown to his parishioners, also an exorcist for his diocese.  When asked if there are such things as ghosts, he referred to the words in the Nicene Creed: “We believe in one God, the Father Almighty, Maker of all that is seen and unseen…”

“If, as an ordinary Christian, you do not recognize the invisible world, then you are blind to a lot of it,” he said.  Besides the 9 choirs of angels and demons, he said there are all the souls that were once attached to bodies.

“After death, our souls will be in heaven or hell but there are those who are not yet in heaven because of their imperfections,” Fr. Patrick said.  “Sometimes they are attached to things here on earth. I believe that is what people report as ghosts–disembodied souls still attached to things or people.”

Fr. Patrick said he has had many encounters with this.  “As soon as people tell me they are having these experiences, I try to determine the name of the party,” he said. “I want to discern what kind of soul we are dealing with.   It could be a soul in purgatory or one that is damned that has not gone to God for judgment yet.”

For the damned, Fr. Patrick said that there is such a thing as hell. “ Only God knows all the opportunities they had and all that they refused,” he said.  “I believe I have met some damned souls.” According to him, there is no specific theology that teaches what to do in those cases and it’s a controversial topic.  He treats it as he does an exorcism and prays for them to depart.

Over and over again, however, Fr. Patrick said he has found a deceased member of the family trapped on earth that did not have a proper preparation for death or a Christian burial.  In such cases, he said these souls can find peace through prayers and Masses being said for them.

“So many souls are earth-bound,” Fr. Patrick said. “God has made us for himself and we shall not rest until we are with him.”

Father Patrick warned people not to seek out ghost hunters that look for haunted houses and come to set up their paranormal equipment.  “They start asking for things to show up and taunting spirits to get a response,” he said. “That is actually abuse. It is not respecting a soul that lives there. That’s like setting up cameras where you live and sticking a microphone in your face while you are trying to get your breakfast.”

Instead, Fr. Patrick said we should pray for departed souls.  And if someone thinks their house is haunted, they should ask their local priest to help.