ROME — A report in an Italian newspaper that Pope Francis has a small, curable brain tumor drew a swift denial from the Vatican Wednesday, with a spokesman labeling the story “unfounded …. seriously irresponsible, and not worthy of attention.”
Citing an unnamed nurse, the Bologna-based daily Qoutidiano Nazionale reported that the pope had traveled by helicopter seven months ago to a clinic near Pisa, called San Rossore di Barbaricina, to see a Japanese neurosurgeon, Dr. Takanori Fukushima, who’s based at Duke University.
Another report from the Italian news agency ANSA suggested that instead of the pope traveling to Pisa, Fukushima instead had traveled by helicopter to Rome. On Fukushima’s personal blog, he describes meeting Pope Francis at the Vatican in January 2015, showing a picture of himself in a helicopter on the way to Rome.
However, Fukushima does not make any reference to treating the pope. In another post, he said he had earlier met Francis on Oct. 1, 2014 during another trip to Italy, saying the experience was “inspiring” because his father had been a priest at a Shinto temple.
According to the clinic’s website, Fukushima is an expert in the treatment of skull base tumors, aneurysms, and malformations of the brain. The newspaper said the doctor had determined that a small dark spot on Francis’ brain could be cured without surgery.
On Wednesday morning, a press aide for the clinic said that its director, Andrea Madonna, denied the report. The aide confirmed that Fukushima is a consultant at the clinic, but declined to say when he was last there.

The Vatican said the story is not true.
“The spread of the totally unfounded news of the health condition of the Holy Father on the part of an Italian news agency is seriously irresponsible and not worthy of attention,” the Rev. Federico Lombardi, the Vatican spokesman, said in a statement.
“Also, as all can see, the Pope continues to exercise his intense activity without interruption and in an absolutely normal way,” Lombardi said. The statement was released as Francis was making his way through St. Peter’s Square in the popemobile at the beginning of his regular weekly audience.
Francis led the audience without any apparent difficulty.
Lombardi “completely confirmed” his denial during a midday Vatican press briefing on Wednesday, saying he did so after checking with Pope Francis.
“There were no medical exams of the kind described,” he said. “The pope is in good health, as you could see this morning. He has some leg pains sometimes, but that’s completely normal.”
Lombardi called the publication of the report “completely unjustifiable” and said he hoped the affair would “be closed immediately.”
Also on Wednesday, the newspaper’s editor, Andrea Cangini, said he expected Lombardi’s denial, but stood by the story. The paper’s privacy policy for heads of state, he said, also applies to the pope.
“The enormous public responsibility of these personalities makes us believe that the right of privacy is less important than the right of the public opinion to be informed,” Cangini said.
Rumors about Pope Francis’ health began almost as soon as he was elected, with stories about missing a lung — a piece of his left lung was removed during a respiratory illness when the future pope was 19 — and his occasional back pains.
While living in Buenos Aires, Argentina, he paid regular visits to a Chinese acupuncturist to try to ease his sciatica, a condition that produces pain running down the leg from the back.
Earlier in the year, ANSA reported that the pope’s personal physician had advised him to lose weight to help him cope with the sciatica, which still makes him grimace once in a while, usually while getting up or sitting down.
Reportedly, doctors asked Francis to reduce his pasta intake to twice a week and to exercise more, which he has neglected since moving to Rome. When he was still in Argentina, then-Cardinal Jorge Mario Bergoglio was famous for taking public transportation and walking everywhere.
By John L. Allen Jr.
http://www.cruxnow.com/church/2015/10/21/vatican-denies-that-pope-francis-has-curable-brain-tumor/ 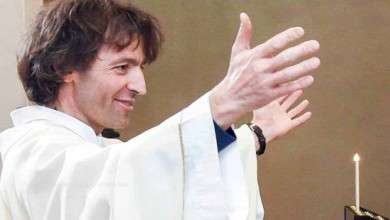