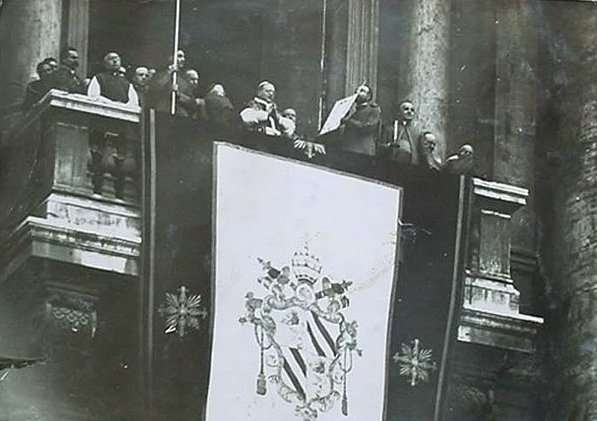 Some very cool footage of the Papal Elections in 1922. Even though the film is silent it captures the energy and continuity of the Catholic Church.Semi-close of Cardinal Mercier, Vatican corridors on their way to the electoral chamber. Ground shots of Cardinals coming to and past camera. Eager and reverent crowds fill the vast square in front of St. Peter’s to hear the results of the Papal ballot.

The papal conclave of 1922, was held following Pope Benedict XV‘s death from pneumonia on 22 January 1922 after a reign of eight years. 53 of the 60 cardinals assembled in the Sistine Chapel eleven days later on 2 February to elect his successor. They chose Cardinal Achille Ratti on the fourteenth ballot, held on the fifth day of the conclave. He took the name Pius XI. The new pope immediately revived the traditional public blessing from the balcony, Urbi et Orbi (“to the city and to the world”), which his predecessors had eschewed since the loss of Rome to the Italian state in 1870.

The four non-European cardinals did not participate in the conclave. Three of them arrived too late and one did not attempt the journey. Three weeks after his election, Pope Pius XI issued rules extending the time between the death of a pope and the start of the conclave in order to increase the likelihood that cardinals from distant locations could participate in the next conclave.