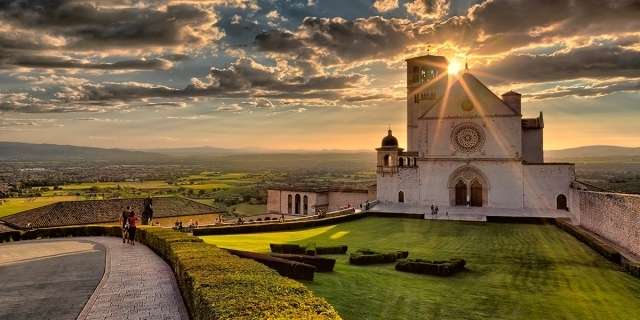 Over the past few decades, walking Caminos have exploded in popularity. Pilgrims setting out on the journey range from religious and devout to spiritual and seeking.

The call to the Camino is a response within the soul to move closer to God – to leave the ordinary in order to embrace the unknown within the context of faith. Many witness miracles, signs, and truth. They often find an answer to their heartfelt prayers, though sometimes God’s answer is different from the one sought.

The Way of St. Francis

Many have heard of, or have perhaps walked, the northern Spanish Camino known as The Way of St. James. Yet there is a lesser known Camino in Italy: the St. Francis Camino (also called the Way of St. Francis). Beginning in Assisi, it traces the footsteps of St. Francis for 150 miles (250 km) over the duration of some 15 days to Rome.

The St. Francis Camino (Via di Francesco in Italian) is not an ancient pilgrimage route like the Spanish Way or the Via Francigena from Canterbury, England to Rome. Instead, it is a newly created trail in the footsteps of St. Francis.

The organizers of this Camino recognized that walking between Assisi and Rome would create an unparalleled journey, as these two cities represent the connection between the popular spirituality of St. Francis and the institutional See of Peter. It begins in Assisi, the city of St. Francis, arguably one of the most well-known and charismatic saints in the Church, and ends in the eternal city of St. Peter, the disciple to whom Jesus handed the keys to the Kingdom of heaven and earth and who led the Church as its Rock.

Apart from the final stage into urban Rome, the St. Francis Camino is known for its stunning natural scenery. It boasts breathtaking views and vistas of the expansive valleys of Spoleto and Rieti. It winds through vast forests, ancient olive groves, and fertile farmlands rich in wheat, cereals, and sunflowers. It climbs sharply up over hills and peaks, followed by gentle descents into the valleys.

As much of the St. Francis Camino is situated within the rugged Apennine Mountains, it necessitates significant physical preparation. Yet it is exhilarating.

At times, the views appear as a brilliant tapestry. The deep blue skies, misty green valleys, and clear star-filled nights seem like a nature-sized painted mural. It is easy to share Francis’ kinship with creation, to want to burst out and praise God for Brother Sun, Sister Moon, indeed all creation, he did in his famous poem/prayer, the Canticle of the Creatures.

A journey through history

The Camino is also rich in culture and history. The storied cities and small fortified hill towns along the route fire the imagination. It’s as if the Camino itself becomes a storyteller and recounts the tales of a bygone world: of ancient civilizations who engineered roads and aqueducts; of Guelphs and Ghibellines who built fortifications to defend popes or emperors; of privileged noblemen who defended their feudal ways against commoners fighting for justice; of hermits and saints who sought God’s will in the hermitages, and sinners who could care less.

Somewhere along the journey, many experience a transformation. By the time they arrive in the Eternal city of Rome – unfazed by the stares of “bus pilgrims” as they arrive clad in their scruffy hiking gear, muddy boots, and worn day pack – they often experience something unexpected.

Certainly there are the tears of joy at having accomplished such an arduous feat. Yet at the same time, the pilgrimage provokes other unexpected responses. Often distant memories surface. The faces of people from long past suddenly appear vividly in the mind. There are tears of joy and gratitude for having been loved and cared for. Other times pilgrims are overwhelmed with a desire to forgive someone, or perhaps to ask forgiveness.

As pilgrims pick up their well-deserved Testimonium certificate of completion issued in the sacristy of St. Peter’s Basilica, they realize that the pilgrimage was more than a journey to a physical destination: the real journey has taken place within. Though perhaps they did not receive exactly what they were searching for, they received the gift God had in mind for them.

A group of pilgrims poses before the Basilica of St. Francis in Assisi before setting out on the St. Francis Camino.

The credenziale, or pilgrim’s passport: special stamps are received daily to verify and recall the journey.

A hand-written letter by St. Francis, one of only two in existence, is conserved in the Cathedral of Spoleto.

An olive grove with a view of the Spoleto Valley in the background.

An ancient Roman mile marker from the era of Caesar Augustus.

The yellow/blue pilgrim sign indicating the direction to Rome.

A scrumptious meal served at a B&B along the way.

A ruined church and bell tower in a field of grains.

The ancient church of Santa Vittoria about forty miles (60 km) from Rome.

The Camino flanks the Tiber River before arriving at St. Peter’s Basilica.

A group arrives and retrieves their Testimonium certificate of completion.

The Testimonium, or certificate of completion, is issued in the sacristy at St. Peter’s basilica.