The Virgin Mary revealed three “secrets” in 1917 to visionaries, which have captivated the world and even warned of the future.

In 1917 three shepherd children reported a series of private revelations from the Virgin Mary, in which she disclosed to them secrets that were confusing at the time, but were later borne out by world events.One of the visionaries, Lucia, later wrote down what she saw and heard, and the text can be found on the Vatican website.

The first part is the vision of hell.

Our Lady showed us a great sea of fire which seemed to be under the earth. Plunged in this fire were demons and souls in human form, like transparent burning embers, all blackened or burnished bronze, floating about in the conflagration, now raised into the air by the flames that issued from within themselves together with great clouds of smoke, now falling back on every side like sparks in a huge fire, without weight or equilibrium, and amid shrieks and groans of pain and despair, which horrified us and made us tremble with fear. The demons could be distinguished by their terrifying and repulsive likeness to frightful and unknown animals, all black and transparent. This vision lasted but an instant.

Our Lady then spoke to them and explained that devotion to the Immaculate Heart of Mary was a means to save souls from going to Hell.

“You have seen hell where the souls of poor sinners go. To save them, God wishes to establish in the world devotion to my Immaculate Heart. If what I say to you is done, many souls will be saved and there will be peace.”

The war is going to end: but if people do not cease offending God, a worse one will break out during the Pontificate of Pius XI. When you see a night illumined by an unknown light, know that this is the great sign given you by God that he is about to punish the world for its crimes, by means of war, famine, and persecutions of the Church and of the Holy Father. To prevent this, I shall come to ask for the consecration of Russia to my Immaculate Heart, and the Communion of reparation on the First Saturdays.

Our Lady of Fatima then spoke about the “errors” of “Russia,” which many believe is a reference to “communism.” The path to peace is a special Marian consecration.

If my requests are heeded, Russia will be converted, and there will be peace; if not, she will spread her errors throughout the world, causing wars and persecutions of the Church. The good will be martyred; the Holy Father will have much to suffer; various nations will be annihilated. In the end, my Immaculate Heart will triumph. The Holy Father will consecrate Russia to me, and she shall be converted, and a period of peace will be granted to the world

The third secret contains much apocalyptic imagery, including a vision of a pope who is shot. Pope John Paul II believed this vision had much to do with his own experience, though the Virgin Mary never mentions specifics.

According to the interpretation of the “little shepherds,” which was also confirmed recently by Sister Lucia, “the Bishop clothed in white” who prays for all the faithful is the Pope. As he makes his way with great difficulty towards the Cross amid the corpses of those who were martyred (Bishops, priests, men and women Religious and many lay people), he too falls to the ground, apparently dead, under a hail of gunfire.

After the assassination attempt of 13 May 1981, it appeared evident that it was “a mother’s hand that guided the bullet’s path,” enabling “the Pope in his throes” to halt “at the threshold of death.”

Another large part of this third vision is penance, calling the world to come back to God.

After the two parts which I have already explained, at the left of Our Lady and a little above, we saw an Angel with a flaming sword in his left hand; flashing, it gave out flames that looked as though they would set the world on fire; but they died out in contact with the splendor that Our Lady radiated towards him from her right hand: pointing to the earth with his right hand, the Angel cried out in a loud voice: ‘Penance, Penance, Penance!’

As a note, while these visions are certainly startling and have captivated the world, they still fall under the category of “private revelation,” and are not part of the Church’s “public revelation” that is found in the Bible and interpreted in sacred Tradition.. Catholics are not required to give religious assent to (believe) anything that is a private revelation, as they are required to give religious assent to the teachings of the Church. 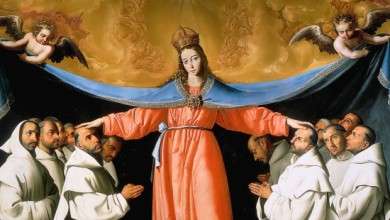 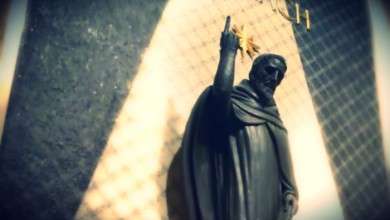 What’s the Goal of the Catholic Church? The Answer May Surprise You 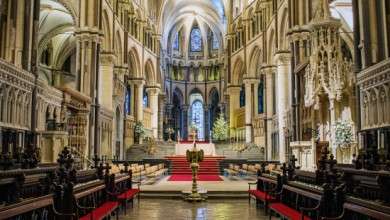 What is the difference between a church and a cathedral? 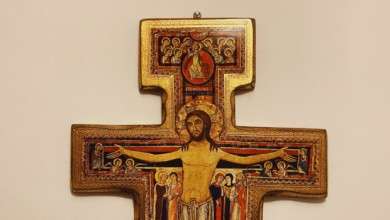