These Old Testament prophets are frequently confused with each other.

There are many names of important figures in the Old Testament, and often they can be confusing. For example, in the Book of Kings there are two prophets who have a very similar name.

In most modern English translations they are called Elijah and Elisha, while older translations may refer to them as Elias and Eliseus. Either way, sometimes it can be hard to know who they are and what separates them from each other.

Here is a very brief rundown of who they were and specific stories that help put them into context.

The prophet Elijah is first found in 1 Kings 17 and was God’s messenger to the kings of Israel, specifically, Ahab, Ahaziah and Joram. He is well known for reviving a widow’s son who had died (1 Kings 17:17-24), and for challenging the priests of Baal to a contest on Mount Carmel (1 Kings 18:20-40).

He was a man devoted to prayer and heard the voice of God on Mount Horeb in a “still small voice” (1 Kings 19:9-14). When the time of his life ended on earth, he was seen taken up to Heaven “in a whirlwind” and passed on his ministry to Elisha (2 Kings 2:1).

The successor to Elijah, the prophet Elisha is first mentioned in 1 Kings 19:16. He becomes a disciple of Elijah after he is seen plowing and Elijah places his mantle on him (1 Kings 19:19). Elisha leaves everything to follow Elijah and learn how to be like him. Elisha was the messenger of God during the reigns of Jehu, Jehoahaz and Jehoash in Israel.

After Elijah was taken up to Heaven, Elisha received a “double portion” of his spirit (2 Kings 2:9). This led to Elisha performing twice as many miracles as Elijah. One of his first miracles was taking the mantle of Elijah and striking the water, making it part in two (2 Kings 2:14). Many of his miracles were similar to what Elijah performed, including the miraculous multiplication of a widow’s jar of oil (2 Kings 4:1-7). When he died, a man was cast into his grave and was miraculously revived after touching the bones of Elisha (2 Kings 13:21).

Where can I find a copy of the Divine Office? 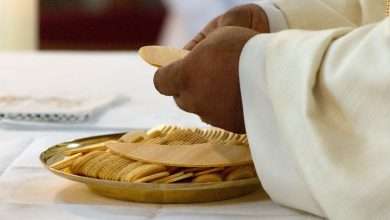 Is it right to kiss the Eucharist?

Is a Protestant allowed to go to confession?