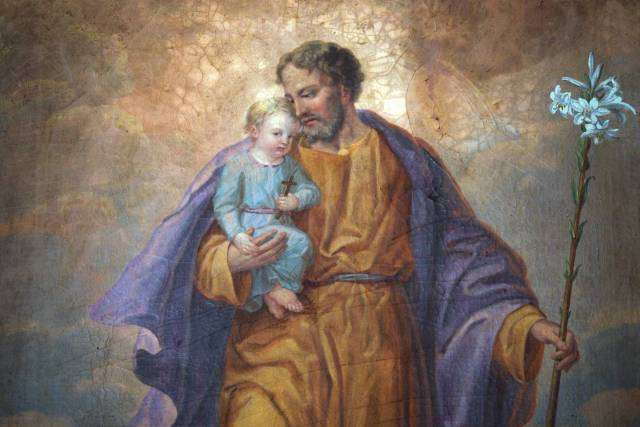 It is both a novena prayer and a physical relic kept in a church in Rome.

One of the most popular devotions to St. Joseph is called the “Holy Cloak Novena.” It consists of a series of prayers said for 30 consecutive days, in memory of the 30 years that some believe St. Joseph lived as Jesus’ foster father.

At the same time, the novena is based, in part, on the belief that there exists an actual cloak of St. Joseph that is kept in a church in Rome.

The 19th-century book The Life and Glories of St. Joseph gives a brief history of this cloak.

Now of St. Joseph no actual relic existed, only some portions of his garments sanctified by contact with his holy and now, as we believe, glorified body. Rome possesses a splendid relic in the pallium or mantle of the saint, so much the more to be venerated as it must so often have enveloped the Divine Infant when clasped in Joseph’s arms. This precious relic was kept in the ancient collegiate church of St. Anastasia built about the year 300 by Apollonia, a noble Roman matron in order there to deposit the body of St. Anastasia, Virgin and Martyr. It is believed that St. Jerome, when called to Rome by St. Damasus for the affairs of his Pontificate, celebrated Mass during the three years of his abode at the altar where this relic is preserved. The chalice of which he made use is still shown.

Is this cloak an authentic relic that was somehow brought from the Holy Land?

Unfortunately, there exists little evidence to back up the claim.

Yet, there did exist at one time a cloak that St. Joseph used to protect the Infant Jesus from the cold weather. With this in mind, we can stir up our imagination and foster a greater appreciation and veneration of St. Joseph, invoking his protection in our own lives.

O holy protector of the Holy Family, protect us children of the Lord Jesus Christ; keep far from us the errors and evils which corrupt the world; assist us from Heaven in our struggles against the powers of darkness. And as you once did protect the Divine Child from the cruel edict of Herod, now defend the Church and keep it safe from all dangers and threats; spread over all of us your holy patronage so that by following your example and aided by your spiritual guidance, we may be enabled to lead a holy life, die a happy death, and come at last to the possession of everlasting blessedness in Heaven. Amen.