The pallium is an ancient vestment that dates back to the 4th century.

Annually on the feast of Sts. Peter and Paul, June 29, it has been the tradition for the pope to bestow on metropolitan archbishops (those who oversee dioceses or archdioceses that are the largest in their ecclesiastical province) the pallium, a white scarf-like vestment that is worn over a bishop’s chasuble.

The pallium is a liturgical vestment that dates to the 4th century and eventually became associated with bishops. By the 11th century, metropolitan archbishops had to seek permission from the pope to wear it. This developed into an annual celebration where the newly appointed archbishops from around the world would travel to Rome and be given the pallium from the Roman Pontiff.

In 2015, Pope Francis determined that the pontiff will no longer formally bestow the pallium on bishops in Rome. Instead, bishops now travel to Rome for the Feast of Sts. Peter and Paul, when the pope blesses the pallia at Mass (after they have been left overnight at the tomb of St. Peter beneath the altar of St. Peter’s Basilica) and presents them to each new metropolitan bishop in private. The bishops then travel home to their own dioceses, where the Papal Nuncio formally bestows the pallium at a special Mass in the home cathedral. This emphasizes the importance of the local diocese and allows for many more of the bishop’s flock to participate in the celebration.

The symbolism of the pallium is rich in meaning.

First of all, the pallia are made of wool from lambs that are presented on the feast of St. Agnes of Rome (January 21), whose name became associated with the Latin word for lamb (agnus). Two lambs are traditionally blessed by the pope on that day and then on Holy Thursday the sheep’s wool is sheared.

According to the Office of Liturgical Celebrations, the wool is then made into a “straight sash of material of almost five centimeters … curved at the center thus allowing it to rest on the shoulders over the … chasuble and with two black flaps falling in front and behind. … It is decorated with six crosses of black silk, one on each end and four on the incurvature, and is decorated in front and on the back, with three pins made of gold and jewels (acicula).”

Pope Benedict XVI spoke about the meaning behind the pallium in his first homily as pope, saying, “The symbolism of the pallium is even more concrete: the lamb’s wool is meant to represent the lost, sick or weak sheep which the shepherd places on his shoulders and carries to the waters of life.”

The pallium highlights the bishop’s role as shepherd and reminds him of the “yoke” of Christ that he is called to carry. This is further emphasized by the six crosses that adorn the pallium, bringing to mind the many crosses that the bishop must bear as a disciple of Christ.

Furthermore, since the pallium is traditionally connected to the papacy, it reinforces the unity of the bishops.

Pope Benedict XVI spoke about this in a homily given in 2011 on the feast of Sts. Peter and Paul, “[the pallium] means that we must be shepherds for unity and in unity, and that it is only in the unity represented by Peter that we truly lead people to Christ.”

So while the pallium is a physically light vestment worn by bishops over their shoulders, it reminds them of the weight of their duties and the responsibility they have to seek and serve the lost sheep.

Can I be my child's godmother?

What Did Jesus Mean by 'Cut Off Your Hand'? 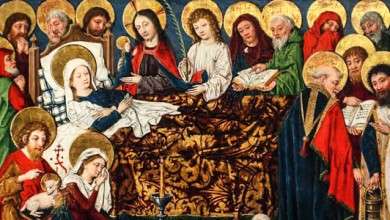