If the scandal was fueled by “psychological immaturity,” what does the ideal candidate look like?

What are the qualities that make a good priest, and how can the Catholic community find the young men who possess these qualities? The experience of recent decades shows that the opinions of psychologists and even clergy have not always proven the best guide. Why not go to the source: the perceptions of the parents themselves?

In order to find the true experts, I sought out Mr. and Mrs. John Azah, of Ghana. Their “little Azah,” born in 1968, has become a much-loved priest both in Ghana and now in the United States. Here is what they had to say:

Since his childhood, we identified that our son Perry would become a special instrument in the family due to his lifestyle. He most often led the family when we had our family devotions; he even went further to become the leader of some devotional groups in the village Church.

He is humble, respectful, loving, light hearted, honest, kind to others, ready to assist whoever needed his assistance. He helps elderly people and widows in the community, and always tries to play a leadership role wherever he finds himself. He was only five years when he started his formal education even though the teachers at the time said he was too small but he proved them wrong when he performed well at their examination.

It’s a striking image: Mr. and Mr. Azah’s son leading family devotions with joy, solemnity, and faith. Such aspects of holiness are often harbingers of a vocation to priesthood.

In the history of the Church, intellectual curiosity and study have also often been twinned with an inclination to the priesthood. Despite struggling with illness, as well as the hardship of war and the Inquisition, St. Ignatius “hit the books” for ten years, earning three degrees in the 1530s. Intellectual rigor, not only in subjects of theology and philosophy, but in “worldly” subjects such as economics, astronomy, or medicine, have been a signature of the order he founded, the Jesuits, for 500 years.

Years ago I waited in the library of the 4th floor apartment in the Apostolic palace. Thinking, “I wonder what the Pope reads?,” I scanned the books in one glass-enclosed case. Here were the writings of 37 different saints, the Doctors of the Church. No doubt here. It was a great curriculum for those yearning for the priesthood.

Courage and refusing to be swayed by others can be a virtue when loyalty is also present. St. Catherine of Sienna displayed these traits in a time of persecution and political complexity. As I writer, a Christian woman in Sudan displays similar fortitude.

Yet a priest must also have compassion and empathy. Among the saints, the founder of the Redemptorists, St. Alphonsus Liguori, is known for his great skills in listening to those coming to confession, as well as encouraging a change of heart with gentleness rather than brimstone. The Cure’ of Ars, St. John Vianney, possessed these same qualities and brought conversion to an entire village in France.

Psycho-social or psychological maturity are vaguely defined but important qualities for any priest. Psychological maturity would involve having a strong support system of family or friends.The ability to deal with loneliness is essential. Knowing how to develop constructive and deep emotional relationships with both men and women is perhaps the strongest indicator of psychological maturity. This can be present in persons even of high school age and be absent in those whose chronological ages place them in a later stage of life.

Of course, being able to lead one’s life and express one’s sexuality within the two-thousand year tradition of the Church is a core requirement for future priests.

As described in the book The New Men, when Cardinal Dolan of New York was Director of the North American College in Rome during the mid-1990s, he used an extremely direct and straightforward method for determining this.

Turning back for guidance to the real experts, Mr. and Mrs. Azah, I learn of the critical role of the family in nurturing a good priest.

“We think that a good and sound family background is the prerequisite of all vocations in life,” said the Azahs, and the priesthood is no exception. Parents who are united and take their faith commitments seriously would be instilling such a faith into their children since children learn from their parents whilst growing up. Our commitment to the Church and prayer is the result of God calling our son to become a priest in the Catholic Church.

We shall advise all parents to play their roles well as responsible parents not shying away from their roles or allowing their children to be on their own in their tender age; because when children are well-trained and given the necessary tools of life and a solid Christian foundation, they will do well in life; and most especially, they will become wonderful priests for the Church of God.

Is the art behind the Pope a demon? People think it is, but it isn't.

My priest said there are different levels of heaven and hell. Where can I find Church documentation on this? 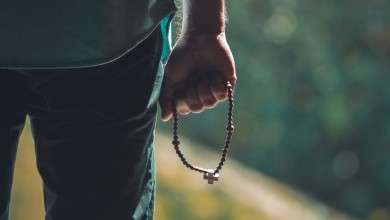 Can I use my Rosary if the crucifix fell off? 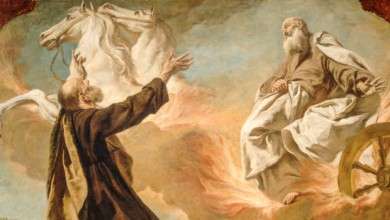 What is the difference between Elijah and Elisha?