I’m on a silent retreat this week (this is being auto-posted), so it seemed like a good idea to post a nice, non-controversial post since I won’t be around to respond to the comments for a few days. Instead, I wrote this one on wearing proper attire to Mass.

And again Jesus spoke to them in parables, saying, “The kingdom of heaven may be compared to a king who gave a marriage feast for his son, and sent his servants to call those who were invited to the marriage feast; but they would not come. Again he sent other servants, saying, ‘Tell those who are invited, Behold, I have made ready my dinner, my oxen and my fat calves are killed, and everything is ready; come to the marriage feast.’ But they made light of it and went off, one to his farm, another to his business, while the rest seized his servants, treated them shamefully, and killed them. The king was angry, and he sent his troops and destroyed those murderers and burned their city. Then he said to his servants, ‘The wedding is ready, but those invited were not worthy.  Go therefore to the thoroughfares, and invite to the marriage feast as many as you find.’ And those servants went out into the streets and gathered all whom they found, both bad and good; so the wedding hall was filled with guests.

“But when the king came in to look at the guests, he saw there a man who had no wedding garment; and he said to him, ‘Friend, how did you get in here without a wedding garment?’ And he was speechless. Then the king said to the attendants, ‘Bind him hand and foot, and cast him into the outer darkness; there men will weep and gnash their teeth.’ For many are called, but few are chosen.”

So, just as you wouldn’t go to a wedding or formal event without preparing yourselves, you shouldn’t go to Mass without making the proper preparations. There are a couple major points to be made here:
1) The disposition of your soul matters most.

From the outset, the wedding garment is part of a parable about the Kingdom of Heaven. The sort of preparations that Christ is talking about are spiritual. When you get to Mass, your soul should be ready to receive the graces that God wants to give you, and you shouldn’t be presenting yourself at Communion without preparing yourself properly.

You wouldn’t go to a wedding covered in filth, so don’t receive Jesus Christ in the Eucharist with a soul covered in filth. Wash yourself off first, by going to Confession. This is a requirement for those who have commit a mortal sin (canon 916). Nor is this rule something that the Church made up, or has the power to change. Receiving Christ irreverently is blasphemous, because it profanes Christ. “Profane” literally means “unholy, not consecrated.” To profane something is to treat a holy thing like it’s not holy. And profaning Christ is gravely sinful.

Nor is this just about preparing yourself for Mass. The Eucharistic Banquet is the Table of the Lord here below, but we’re going to enjoy that Banquet in its fullest in eternity: “Blessed are those who are invited to the marriage supper of the Lamb” (Revelation 19:9). That’s the Banquet we most need to be ready for. Someday, we know not when, you and I are going to stand before God at the Last Judgment. Every single day of our life should be spent preparing for that.
2) Your clothes still matter. Obviously, the way that we prepare for Mass involves much more than putting on appropriate clothes, but what we wear matters. Why? Because one of the ways that we should show respect is by dressing respectfully. Hopefully, you wouldn’t dream of going to a job interview or your wedding wearing a t-shirt and shorts. If you did, it would seem either clueless or deliberately insulting, like you weren’t taking the occasion seriously. Why dress that way to the Holy Sacrifice of the Mass, then? Who Are We Dressing For?

Unfortunately, much of the discussion only about how we dress for Mass focuses exclusively on whether young women are wearing clothing that’s revealing. Certainly, that’s one way to dress inappropriately for Mass. Young women shouldn’t be wearing clothing that’s immodest, or which shifts the focus from Our Lord to their bodies. We live in a culture saturated in sex, and especially for teenage boys and young men striving to live a holy life, this can involve a constant battle for purity, and a constant need for vigilance and custody of the eyes. We should be supporting them in this heroic struggle, rather than leading them into greater temptation. But the problem is much bigger than that: often, the girls dressed like they’re going to a nightclub are sitting with a dad who looks like he’s going golfing, or a mom who looks like she’s going jogging, or a brother who looks like he’s next up at bat. You can have every inch of skin covered, and still be dressed inappropriately for Mass. A major part of the underlying issue is this: are you dressed like Mass is the most important part of your day? Are you dressed like being pleasing to God is more important than impressing the people in the pews around you?

I alluded to sports attire a moment ago, but I want to touch on that a bit more. Sometimes, people go to Mass on Sunday with their kids in jerseys, so that they can get them to the game right after Mass (even leaving right after receiving Communion). When they do this, they’re saying something about Who and what matters most. The message you’re sending to those around you and to your own kids is that Mass is just an obligation we check off the list before we get to the important stuff like the game.  Think about it. If Mass were more important than the game, why wouldn’t you be dressed for it? After all, if your day’s to-do list consisted of an official state dinner to meet with the Queen of England, followed by a baseball game for your kid, you probably wouldn’t show up to the dinner dressed for the game to save time.

At Mass, you encounter the King of Kings. That’s why this is infinitely bigger than dressing to avoid scandalizing the distractible guy in the pew behind you. Even if you were literally the only person in the pews, you should still take the time to dress up, because you’re meeting with Someone very important: Jesus Christ. “Embodied Cognition” It’s easy to imagine that the clothes we wear are irrelevant, that they don’t impact how we view ourselves or how we carry ourselves. Scientists are now discovering that this isn’t true. There’s a field of social psychology that studies “embodied cognition,” which is “the idea that aspects of your thoughts are shaped by your body.” You’re both body and soul, and how you treat the one impacts the other.  For example, Professor Adam D. Galinsky gave a test to three groups of students:

Some would wear a white coat, and were told it was a doctor’s coat. Others wore an identical coat, but were told it was a painter’s coat. And a third group merely looked at a white “doctor’s” coat. The subject then took an attention test where they were asked to point out differences between two images and speedily write them down. Those who wore the “doctor’s” coat performed significantly better than the other two groups.

In a similar test between students in lab coats and students in street clothes, “those who wore the white lab coats made about half as many errors on incongruent trials as those who wore regular clothes.” Galinsky concluded that, “clothes invade the body and brain, putting the wearer into a different psychological state.” Simply dressing smart made them act smarter. We should take that lesson to heart. Dressing holy isn’t enough to become holy, but it’s definitely a good start. Some Important Nuance Having said all of this, let me close with a few caveats:

Bearing this nuance in mind, let this be a call for all of us to be more mindful about how we are physically and (especially) spiritually readying ourselves for Mass. 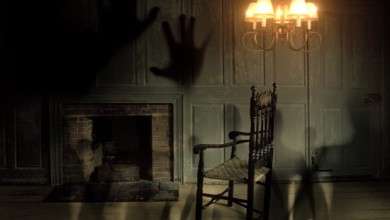 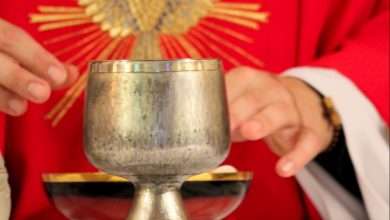 What Does “Co-heirs to Eternal Life” Mean?

Why were the words of the mystery of faith taken out of the consecration in the New Mass?

Is it true that we need to burn or bury irreparable blessed religious items?