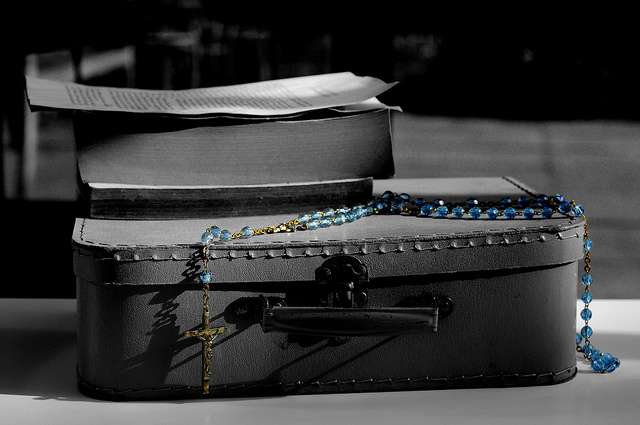 What Sucks About the Catholic Church

Home » Articles » What Sucks About the Catholic Church

Some days I don’t want to be a Catholic anymore. Some days I’m not even sure God exists.

So far in my conversion story I’ve painted what’s probably a pretty sunny picture of the Catholic Church. I don’t want to be a downer, but that’s far from the whole truth. In reality, there are days when I don’t want to be a Catholic anymore. When it falls apart on me and I have to begin, with the help of the Holy Spirit, to rebuild again. Certainly the majority of the last few months, since the beginning of RCIA (Rite of Christian Initiation for Adults) and my serious conversion to the Catholic Church, have been incredible. But there have been dark days; there have been times when I’ve thought, “This is it?”

In the vein of being totally vulnerable, and honest, here’s what sucks about the Catholic Church.

I grew up as a Christian in high school. As I’ve written before it was through a best friend of mine, a devout Christian, that I came to understand the message and mission of Jesus, and my part in it.

Immediately, I drove to the local Christian bookstore—The Treasure House—and bought a Bible. I knew this is what you needed to do as a Christian: to read your Bible. I bought a New King James translation, the XTreme Teen Bible, and began reading from page one.

I laugh now when I hear a conversion story like Jennifer Fulwiler, a former atheist, who did the same thing, I appreciate, more and more, the serious attention that the Catholic Church pays to adult (or teenage) converts with the RCIA program. But, I eventually did learn how to read my Bible, or at least where to begin and after slogging through Genesis, Exodus, Leviticus, Numbers, and Deuteronomy somebody told me I should’ve started at Matthew.

Even if explaining how to begin in the faith wasn’t taken too seriously in the tradition I first “grew up” in Bible study and understanding Scripture certainly was. We had rigorous adult Sunday school on Sunday morning. We had mid-week Bible studies and small groups. We had a youth group that wasn’t afraid to dig into Scripture. And amongst Christian friends the Bible wasn’t a taboo topic, rather we were all well-versed, and fluent in the Scriptures. We took it seriously and privately read our Bibles of our own free will, as teenagers.

In the evangelical traditions that I’ve been exposed to since, as an adult, the same thing applies. Protestants, especially evangelicals, know their Bibles well and take studying and understanding their faith seriously.

Catholics suck at this.

I knew Catholics sucked at this. Reading conversions stories from Protestants, especially evangelicals, who’ve become Catholics this is one of their chief laments. The average Catholic doesn’t know their Bible well, and this is detrimental.

I was shocked, for example, when I knew more about the Bible (in terms of origins, order of the books, etc.) than most of the teachers at the RCIA class in my parish. Disappointed is maybe a better word.

Of course it isn’t, I’ve found, that Catholics don’t know their faith very well. The Bible is a crucial part of the Catholic faith—readings from Scripture make up the bulk of a Catholic Mass on Sunday—but rigorous Bible study is far less prevalent in the Catholic Church than in the Protestant traditions I’ve known. And it’s a shame.

My lovely wife, who has attended a few Masses with me, commented on the Catholic miracle of the multiplying coats. As soon as Mass is nearing its end it seems like suddenly everyone’s coat appears on their body, miraculously. As soon as the recessional hymn is played the majority of the churchgoers who were, minutes earlier, warming the pews, make a beeline for the exit doors and disappear faster than you can say, “Father, Son, and Holy Spirit.”

I heard a Catholic convert from Protestantism describe this as “drive-thru Catholicism.” It sucks.

Finally, Catholics suck at catechesis. Catechesis is a fancy Catholic word that means faith formation: understanding what you believe, and why you believe it and Catholics suck at this too. If you ask the average Catholic why they pray to the saints, why they venerate, not worship, Mary (and what the difference is), why there are so many statues in their churches, or what purgatory is all about many probably don’t know, or can’t explain. Like the lack of biblical fluency, like the rush out the door at the end of a Mass, this is a colossal failure of the Catholic Church.

The New Evangelization, a term coined by Pope John Paul II, is a movement intended to upset this balance in the Church.

Pope John Paul II imagined a Church that could explain itself well, in which its members were eager and enthusiastic about their church community, and that had a deep biblical fluency because the Bible, after all, is central to the Christian faith. The New Evangelization is a good idea and is embraced in many quarters of the Catholic Church. Many of the writers, speakers, and Protestant converts to the Catholic church have embraced the New Evangelization but it’s painfully slow catching on. Some parishes are doing an incredible job of becoming more Protestant in their rigorous teaching, but many are woefully behind.

As I’m becoming Catholic I’m realizing that there’s some stuff that the Church really sucks at. On balance, the Protestant circles I’ve been in were made up of people who knew their faiths inside and out, knew their Bible, and loved their church communities. Protestants I know take their faith seriously, live it out, and are eager to know it more and grow in it.

Ironically, while Protestants talk about “evangelization” as an outward-facing expression, the New Evangelization heralded by Pope John Paul II begins, rightly so, inside the Catholic Church. Brilliant move, really, and insightful.

But that’s the thing, isn’t it? I see a Catholic Church that is, on one hand, beautiful and brilliant and, as far as I am learning on this journey, true. On the other hand, it’s a Church that’s awful at knowing and explaining itself and whose members are only too eager to get their jacket on and jet out the door. A perfectly preserved divine institution—populated by humans, of all things.

I’ve come to an ultimate conclusion though, and it’s one that many Protestant converts before me have come to as well. The Church is us. As a Protestant convert to Catholicism I bring certain gifts, talents, and insights. If there’s a need for better catechesis in my parish my role isn’t to lament the church’s failure, it’s to start a Bible study. If RCIA sometimes seems like a chore for those leading it then maybe I need to volunteer next year. If not enough laypeople are devoted to keeping the church open during Eucharistic Adoration than maybe I can help arrange a schedule. Do you see what I mean?

The default attitude for us Protestant converts needs to shift—my attitude needs to shift—from seeing what sucks about the Catholic Church to doing something about it. After all, when Jesus gave his most difficult teaching on the Eucharist—his very own blood and body given to His Church—He asked his closest disciples, “Are you going to leave, too?”

St. Peter replied, “Lord, to whom shall we go?”