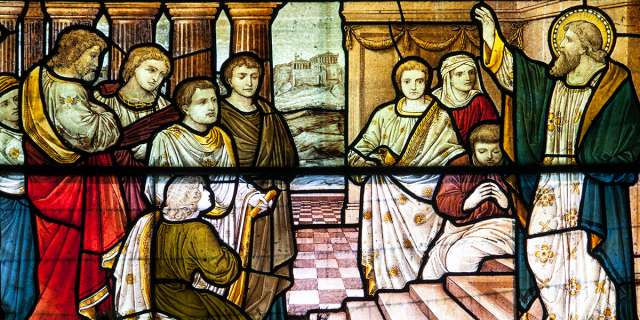 The history of Lent is complex, as it took many centuries to develop before it became what it is today.

Was the season of Lent always 40 days long? Were the apostles the ones responsible for establishing it? If not them, who did?

During the first few centuries of the Church, Christians were often persecuted and it was difficult for the bishops of the Church to create an all encompassing liturgical calendar. In general, bishops were entrusted with a local church and it was up to them to lead the Christian people in the worship of God. This resulted in an early disparity in how Christians celebrated Lent.

St. Irenaeus, during the 2nd century, wrote a letter to the pope at the time about the variety of fasts before Easter.

For the controversy is not only concerning the day [of Easter], but also concerning the very manner of the fast. For some think that they should fast one day, others two, yet others more; some, moreover, count their day as consisting of forty hours day and night.And this variety in its observance has not originated in our time; but long before in that of our ancestors. It is likely that they did not hold to strict accuracy, and thus formed a custom for their posterity according to their own simplicity and peculiar mode. Yet all of these lived none the less in peace, and we also live in peace with one another; and the disagreement in regard to the fast confirms the agreement in the faith.

Early Christians were in agreement that a fast should precede the feast of Easter, but a duration of 40 days was not set in stone.

Origin of the 40 day Lent

At the same time, scholars have discovered that some Christians in the Egyptian desert held a Post-Theophany fast for 40 days. The feast of the Theophany commemorated the baptism of Jesus and was traditionally held on January 6. Therefore, these Christians began a fast on the day after the Theophany in imitation of Jesus, who went into the wilderness to fast for 40 days immediately after his own baptism.

This fast did not end on Easter, but it did end with a baptismal ceremony, initiating new members into the Christian faith.

Some scholars believe that the tradition of the Post-Theophany fast was later merged with other traditions to create the Lenten season as we know it today. It wasn’t until after the Council of Nicea in the year 325 that Lent was widely established as a 40-day fast. The legalization of Christianity allowed for a more public celebration of fasting and the bishops were finally able to begin the process of uniting under the Bishop of Rome in all things, including liturgical disciplines.

While Lent has changed since the beginning of the Church, the roots of Lent go deep and the widespread fast for 40 days has ancient origins.