Why did Christ establish one, holy, catholic, and apostolic Church?

Why did the eternal Son of God become incarnate of the Virgin Mary, call the Twelve, establish them on the rock that is Peter, give them the power to proclaim his Kingdom and even to absolve sins, and empower them with the Holy Spirit to lead them into all truth?

In other words, why did Jesus ascend into the heavens and leave his Church to finish the mission?

To answer these questions, it can help to ask another question: What does God love most? What is God’s goal?

Because God’s existence does not depend on anything outside of himself there can be only one answer. God’s goal is God. God loves God most.

Does this make God an egocentric narcissist who is ultimately incapable of love? Not at all. God is not “self-centered” in human terms; God is God-centered in God terms, and “God is love” (1 John 4:8). God’s very being is an eternal exchange of love—Father loving Son, Son loving Father, in the binding love of the Holy Spirit.

God’s ultimate goal is to glorify God and to enjoy God forever. To borrow from Ignatius of Loyola, everything God does is “for the greater glory of God.” The Persons of the most adorable Trinity—Father, Son, and Holy Spirit—are eternally and passionately in love with one another. God’s love for us is grounded in God’s love for himself, and this makes his love for us so divine.

“God so loved the world that he gave his only Son.” (John 3:16) We were made for God. “God has made us for himself,” says St. Augustine, “and our hearts are restless until they rest in him.” In the words of Pope Emeritus Benedict XVI: “Redemption means that God, acting as God truly does, gives us nothing less than himself. The gift of God is God—he who as the Holy Spirit is communion with us.”

This truth first stabbed my heart when I was reading Cardinal John Henry Newman: “God was all-complete, all-blessed in Himself, but it was His will to create a world for His glory…We are all created to His glory.” It was fanned into a flame when my favorite poet, Gerard Manley Hopkins, answered the question, ‘Why did God create?’ with this reflection:

[God] meant the world to give him praise, reverence, and service; to give him glory. It is like a garden, a field he sows: what should it bear him? praise, reverence, and service; it should yield him glory…It is a book he has written, of the riches of his knowledge, teaching endless truths, full of lessons of wisdom, a poem of beauty: what is it about? His praise, the reverence due to him, the way to serve him; it tells him of his glory.

When it comes to the Catholic Church, our first impulse can be to want God to make a big deal out of us. We want him to make us the center of attention.

But the Church is not about us. It’s about God.

When Christ established the Church as his new creation, he made a “praise, reverence, and service; it should yield him glory.” The Church “is like a garden, a field [God] sows.” St. Paul says “You are God’s field” (1 Cor. 3:9). As the baptized faithful, then, we were made for growing something beautiful, for bringing God praise. Until we get this right, we will never get the Catholic Church right.

As the new Adam (1 Cor. 15:45), Jesus Christ offers himself to the Father through the Spirit with his new Eve. The “new Eve” is God’s new creation and new humanity, the Church, his Body and Bride, personified in the Virgin Mary, who is filled with God’s Spirit and is the new mother of all living, the Queen of Heaven (Rev. 11:19-12:17). As the Church, we are Christ’s new creation. The Church reflects that uncreated Family of God, which is the Trinity, because she is the created Family, “the family of God” (CCC, no. 1655). By founding one Church as his mystical Body—as an extension of his Incarnation—Christ divinized flesh and made us “partakers of the divine nature” (2 Pet. 1:4). In Christ, we have become children in the eternal family of the Trinity.

The Catholic Church is one because the Trinity is one. The Church’s “diversity”—which is not the same thing as schism, contradictory doctrines, or so-called branches—reflects the unity-in-diversity of the Trinity. Jesus prays that his Church would be completely one because this unity will bring God glory (John 17:21-24). God re-made us in Baptism for the same reason God made us in the first place—for the maximization of his own glory.

“Bring my sons and daughters from afar, everyone who is called by my name, whom I created for my glory” (Isa. 43:6-7). The Didache puts it this way: “You, Almighty Master, created all things for your name’s sake…to you be the glory forever.”

So why did Christ establish one, holy, catholic, and apostolic Church? Because God is reigning. He has established his Kingdom. Jesus is the new king David (Luke 1:32), ruling the nations (Rev. 12:5) as “the King of kings and Lord of lords” (Rev. 19:16). As the new Messianic King, he treats his mother with at least as much honor as Solomon and all the other Davidic kings treated their mothers (1 Kings 2:19-20; Rev. 12:1).

As the new David, Jesus requires not only a cabinet of twelve ministers (1 Kings 4:7), the Twelve Apostles (Matt. 10:2-4), but also a Prime Minister (Isaiah 22:15-25), Saint Peter (Matt. 16:15-19). As King, Christ promised to be with us “to the end” (Matt. 28:20). Jesus ascended into the heavens and left his Catholic Church to finish the mission because he is bringing glory to his Father in Heaven—and he wants us, empowered with the Holy Spirit, to join him.

Christ created the Catholic Church to give God “praise, reverence, and service; to give him glory.” The goal is glory, the family of God enjoying and sharing the glory of God. The apostolic succession is a living sign of Christ’s unending mediation as “the one mediator between God and men, the man Jesus Christ” (1 Tim. 2:5). By grace, the Church is Christ’s mystical Body; by love she is his glorious Bride. She is “his body, the fullness of him who fills everything in every way” (Eph. 1:23). She is “a chosen race, a royal priesthood, a holy nation, God’s own people” (1 Pet. 2:9).

The Catholic Church is “the pillar and foundation of the truth” (1 Tim. 3:15) because she is led by the Holy Spirit “into all truth” (John 16:13). She is built by Christ on the “rock” that is Peter (Matt. 16:17-19), built as a City with “twelve foundations, and on them the names of the twelve apostles” (Rev. 21:14), “built on the foundation of the apostles and prophets, with Christ Jesus himself as the chief cornerstone” (Eph. 2:20), built on the foundation of Jesus Christ (1 Cor. 3:11). The Catholic Church is “built as a city that is at unity with itself” (Ps. 122:2) because the goal is the supreme exultation of the most adorable Trinity.

The mission is salvation—not because we’re kind-of-a-big-deal, but because God’s a big deal. As Catholics, we are finishing the mission. God is bringing glory to himself through his Church, and we are called to be a part of it.

The only question is, will you finish the mission?

Originally posted on The Catholic Gentleman 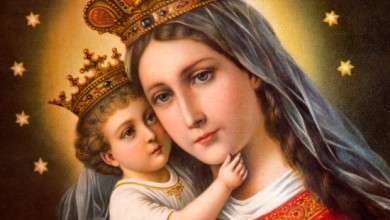