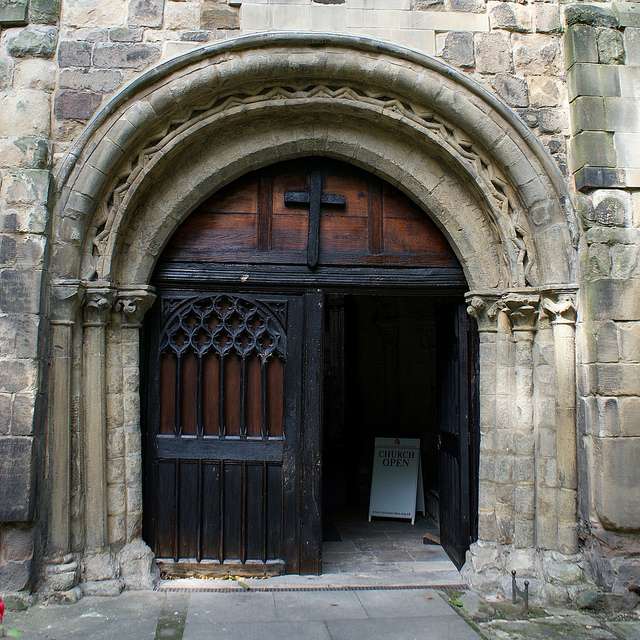 Home » Q&A » What’s the Biggest Difference Between Catholics and Evangelicals?

I’ve heard it described, by more than one convert, that becoming a Catholic after being an Evangelical is as big of a paradigm shift as going from being an Atheist to believing in God. That’s a pretty big jump and if I hadn’t experienced it I wouldn’t have believed it was true. But, truth be told, my conversion bridged a pretty similar chasm in the end.

I was an Evangelical. I’m now a Catholic.

From a radical conversion to Christ in high school I spent the next decade-and-a-half as a zealous Evangelical Christian. I was theologically educated at youth group, took part in a healthy share of mid-week Bible studies, went on overseas missions trips, attended church twice on most Sundays, and was regularly found debating the finer points of Anti-dispensationalism with my peers on any given Friday night.

In university, I connected with a vibrant student church were I lead small groups, helped out regularly at our weekly services, and met my beautiful wife. Together we wore many hats in our church community from working on the missions team to co-ordinating a married couples seminar to small group facilitation to organizing a yearly Christmas Coffee House.

And everything in between.

Every Christmas and birthday my typical haul, a stack of books, was a regular who’s who of Evangelical heavyweights like Eugene Peterson, Dallas Willard, and N.T. Wright. I’ve engaged in in-depth study groups looking at some of the seminal works of J.I. Packer, C.S. Lewis and I once celebrated Communion in a tiny college chapel with Donald Miller.

I was steeped in a beautiful, vibrant tradition, and never wanted anything more.

But when an Evangelical pastor, at a church I was working for, called me into his office one afternoon I was unprepared for what would happen next—or the massive ramifications which were about to follow. “What’s more important,” he said, “the Bible or Tradition?”

The answer to that question would lead me on a journey of many miles. And wind me up in the Catholic Church.

It’s a long and, I think, interesting story but not what I want to explore here. Instead, I want to tackle a question I’ve received over and over again since I began writing about my faith: What’s the biggest difference between Catholics and Evangelicals?

Believers, on both sides, want to know.

And since I’ve crossed the rubicon—or, better yet, the River Tiber—it’s fair to say that I have a pretty good perspective on the whole thing.

It Begins with a Church Door

When I first plucked up the courage to call a Catholic Church and inquire about crossing over I was met, on the phone, by a charming nun in her early seventies. We chatted a bit and decided to meet a few days later to sign some forms so I could begin taking classes at the parish the following week. When I arrived at the church, a few days later, I was met by the problem of a billion doors. The church itself, built in the 1890’s, was grand by any standard, dwarfing the WWI era bungalows and 1 1/2 storey houses which flanked it on all sides, but what perplexed me, completely, was the sheer number of entrances.

To be perfectly honest, it took a while. And I was late for my meeting.

But when I finally tugged on the main church doors, the one set of doors that finally gave way, they were heavy as could be. Impossible, really. These were great, thick oaken doors which required some serious shoulder muscles to pull open. I wondered to myself how my friend, the little old nun, could possibly open them herself. But open them she must’ve. And in I went.

But I know now what I didn’t know then and it’s kind of remarkable. Those doors—those heavy, old oak doors—were my first sacramental experience of the Catholic faith. The first thing I encountered, on my journey into Catholicism, which was an intentional, sacred kind of object, pointing back to Christ. An experience of God, in a door, and an occasion for grace.

What I know now is that those heavy church doors were intentionally so. That Christ, who describes Himself as “the Door” is symbolized, is sacramentalized, in the doors of a Catholic church. This is why they’re heavy, why they’re intentional, why they’re particularly designed. Because Christ is that sacred doorway—keeping things out, and letting things in. (This is why, incidentally, a proper Catholic baptism ought to begin outside of the church. The parents then knock on the door, pointing back to Christ and the gospels.)

And this is, ultimately, the biggest difference between Catholics and Evangelicals. The sacramental life.

Christians, from the very beginning, believed in a sacramental reality which stretched back to the very most beginnings of salvation history. Think of God’s provision of mana for the Israelites, think of the burning bush, the passover, the sacrificial system in the Temple. These Old Testament encounters with God spelled out clearly how He operated, how He chose, again and again, to interact with His people: through symbols and signs and tangible realities which pointed back to who He was.

And when Jesus, God Incarnate, came and walked amongst man he operated in much the same way. Think of Jesus rubbing mud into the eyes of a blind man, of the importance of baptism, of His insistence that we must eat His flesh and commemorate His death with the real, tangible objects of bread and wine.

When Jesus dies and rises again to the Father we see His apostles and their followers, the very first Christians referred to by the crowds as Little Christs, living and worshipping in much the same way. Here, think of the supernatural power infused in Paul’s handkerchief or Peter’s shadow. Think of Peter affirming, like Christ, the importance of baptism—a sacrament and symbol—when asked what one had to do to “be saved.” Think of the laying on hands to heal and the breaking of bread to celebrate life in Christ.

In fact the sacramental life of the Christian Church stretched up until the Reformation, and beyond.

The Early Church Fathers, the church leaders discipled by the apostles, wrote vividly of the tangible, grace-filled reality of the Christian life in the first centuries. Later, fierce and faithful theologians like Augustine, Thomas Aquinas, and Teresa of Avila would write prosaically about the nature of how God works and reveals Himself to His creation. Through the grace of tangible realities; through signs and symbols; through stuff.

And this, I would suggest, is the great big giant difference between Catholics and Evangelicals.

We believe in the power of stuff.

Another Denomination? Or an Ancient Tradition?

My biggest surprise, as I journeyed towards the Catholic Church, was just how ancient the faith was. From the outside, as an Evangelical, I saw the Catholic Church as yet another denomination in a large landscape of Christians traditions. Headed toward the inside, however, and through a thorough study in the history of the faith, I was surprised to learn that the roots of Catholicism stretch, in perpetuity, to the beginning.

While other Christian traditions began with Martin Luther or John Calvin or Huldrych Zwingli the Catholic faith, part and parcel, can trace its theology through apostolic succession to the start.

That isn’t to boast or brag or belittle other more recent Christian traditions save to say when I first encountered the sacramental system of faith in the Catholic Church what I was encountering, without dispute, was what Christians believed from the beginning. And held fast to for 1,500 years (even through the Eastern Orthodox schism in the 1000’s). To my surprise—and surprise indeed—the idea that baptism was merely a symbol, that the Lord’s supper wasn’t meant to be really flesh and blood, and that grace wasn’t a thing that could be delivered through tangible means were actually new inventions in the long lineage of Christian thought.

The normative approach, for 1,500 years, was a belief in the power of stuff.

The importance of a great big church door, of Christ, and a knocking.

And that, remarkably, my becoming Catholic, my seismic shift in thinking about the world around me, wasn’t so much a turning over of a new leaf but a turning back towards home, back towards the stream of Christian thought that began with the apostles, with Jesus Himself, with the burning bush at the very beginning. With, in all actuality, God breathing on the world. And it was good. An indication of the sacramental nature of our faith—in the very first pages of Genesis.

The Same Faith, but Different

Remarkably, as I made the leap from Evangelical to Catholic what changed weren’t many of my core beliefs. On salvation, Catholics and Evangelicals have it basically the same although many, on both sides, misunderstand this. On baptism, eternity, and the nature of man I was largely Catholic without even knowing it. And on topics like authority, the Bible, and the nature of the Eucharist the Early Church Fathers and their succinct writing on the subjects demonstrated, for me, the Catholic nature of our faith at its very beginning. It was more than a convincing case for the Catholic Church.

But of all those things which, I thought, would be so different from my Evangelical faith what ended up being the thing which stood out the most was my view, as a Catholic, of the whole entire world. The sacramental nature of the signs and symbols which God uses to point back to Himself. The importance of these small, supernatural indicators. And the fact that God, since the beginning, pointed back to Himself in exactly this way.

What I began to understand as a Catholic was that this was why the church, in its rituals, used so many different physical things. Why churches look a certain way. Why we kneel to pray and and stand to sing and sit to listen. Why we cross ourselves and are anointed with oil and dunked in water and sprinkle things with salt. I began to understand why the churches gives us these physical things—because this is how God works, how he has always worked, to communicate and come close to His very physical creations.