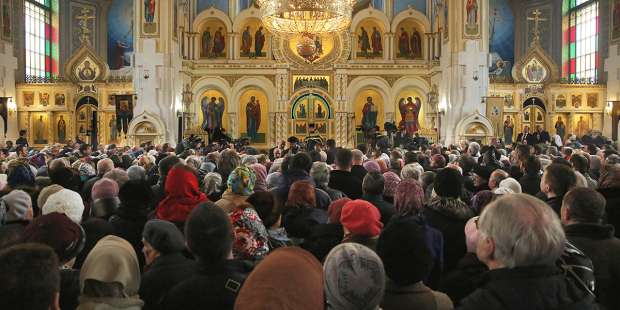 Catholic Home » Q&A » Why do Eastern Catholics stand during Mass?

In the Eastern Church, reverence and adoration is expressed differently than what Roman Catholics are accustomed to.

Standing during prayer has been a Christian tradition since the very beginning of the Church. This can clearly be seen by looking at various images drawn in the catacombs during the first few centuries of Christianity, which depict men and women standing in prayer.

Naturally, standing became a typical posture of prayer during the celebration of Mass. While it’s true that kneeling was also part of liturgical prayer, standing was highly favored and seen as a sign of respect and adoration. The Council of Nicea in 325 even went so far as to ban the faithful from kneeling at the Sunday liturgy, so as to promote uniformity.

Since there are some who kneel on Sunday and during the season of Pentecost, this holy synod decrees that, so that the same observances may be maintained in every diocese, one should offer one’s prayers to the Lord standing.

For this reason, Catholics (and Orthodox Christians) who maintain the Eastern traditions of the Christian faith always stand during the Divine Liturgy. It is not customary to kneel during the consecration of the Eucharist because in the Byzantine culture, kneeling was associated with penance, not adoration.

Here is one simple description of the practice from a Byzantine church.

We are standing with our Resurrected and Glorified Lord and this is our proper liturgical sign of being united with Christ as one body. There is no disrespect in standing. Kneeling is considered penitential. We only kneel at certain services during Lent, such as during our Liturgies of the Presanctified Gifts.

While this practice may sound strange to Roman Catholics, it is completely acceptable and is in accord with the culture of Eastern Catholicism. Standing and bowing during the Divine Liturgy is as reverent as kneeling is in a Roman Rite Church.

The Church allows for many traditions to be practiced within the liturgy, and each highlights the beauty of culture and its ability to communicate the same truths through different signs and symbols.