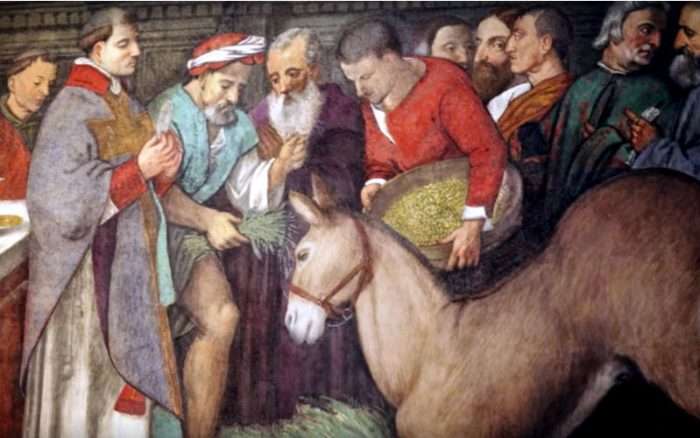 When a Mule Adored the Eucharist: How St. Anthony of Padua Proved Christ’s Real Presence to a Heretic

Catholic Home » Stories » When a Mule Adored the Eucharist: How St. Anthony of Padua Proved Christ’s Real Presence to a Heretic

This is such an cool story about the amazing St. Anthony of Padua!

June 13 is the feast of the miraculous St. Anthony of Padua, patron saint of lost items, the poor, and travelers.

The Catholic Church attributes many miracles to this 13-century saint, one of which proved the presence of the Eucharist to a heretic.

St. Anthony fought and taught against heresies, including the Cather heresy, which denied the true presence of Jesus in the Eucharist.  Toulouse, Italy was the central point of this heresy, and St. Anthony participated in multiple public debates against it.

During one debate, a man named Bononillo challenged St. Anthony’s belief of the Eucharistic presence.

He said, “If you can make my mule bow down before what you call the Body of Christ, I will believe.”

St. Anthony tried to convince him in other ways, but did not see any other option.

Bononillo decided to then starve his mule for three days.

On the third day, St. Anthony celebrated Mass in the city’s public square. After Mass, Bononillo went before St. Anthony, and offered his mule food, while St. Anthony carried a consecrated a host.

St. Anthony held up the Eucharistic host, and rather than accepting Bononillo’s food, the starved mule bowed down and kneeled before the Eucharist.

Once Bononillo saw this, he also bowed and knelt before the Eucharist. Many other heretics converted that day.