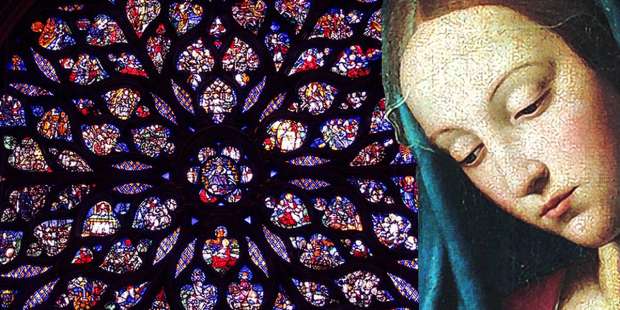 Though the text is straight from Scripture, the prayer itself doesn’t go back as long as you might think.

However, while the prayer is essentially straight from the Bible, Christians did not put the two verses together until the 11th century. The Catholic Encyclopedia explains, “In point of fact there is little or no trace of the Hail Mary as an accepted devotional formula before about 1050. All the evidence suggests that it took its rise from certain versicles and responsories occurring in the Little Office or Cursus of the Blessed Virgin which just at that time was coming into favor among the monastic orders. Two Anglo-Saxon manuscripts at the British Museum, one of which may be as old as the year 1030, show that the words ‘Ave Maria’ etc. and ‘benedicta tu in mulieribus et benedictus fructus ventris tui’ occurred in almost every part of the Cursus, and though we cannot be sure that these clauses were at first joined together so as to make one prayer, there is conclusive evidence that this had come to pass only a very little later.”

The prayer is now a central pillar of Catholic devotion. It expresses our love for the Blessed Virgin Mary using words from Scripture and then asks for her assistance in our hour of need. It is a beautiful prayer, one that has a history going back at least one thousand years.

Read more:
Pope asks us to add these 2 prayers to end of Rosary in month of May