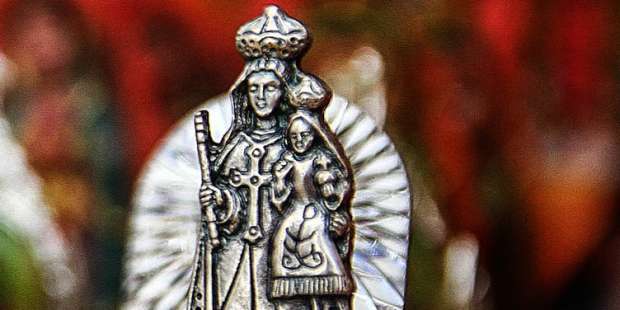 Much beloved in Ecuador, Our Lady of Quinche had humble beginnings but brought about an astonishing event.

Once in a while God does something out of the ordinary to show us, even in this life, that his goodness triumphs over the power of evil and death, and that resurrection is real.Imagine how you would feel if someone you knew died and came back to life under miraculous circumstances. While this isn’t something we hear about each day, it has in fact happened on multiple occasions. Of course, it’s always been a powerful experience, powerful enough to bring hope to many, reaffirming the faith of believers and bringing those who don’t know God into contact with him.

One such resurrection miracle caused a small image of Our Lady hidden in the woods to become a popular place of pilgrimage for centuries.

Our Lady of Quinche, a national patroness of Ecuador, had humble beginnings. In the mid-16th century, a wood carver was commissioned to craft an image of the Virgin Mary for a native Ecuadorian tribe. When he went to deliver the product, the tribe was unable to pay for it, so the artist ended up trading it with a neighboring tribe, the Oyacachi Indians, in return for more cedar wood.

The Oyacachis carved a niche in a rock formation to house the image of Mary. Songbirds kept the statue company by day, and by night the Indians gathered by the image to sing and play in honor of the Virgin. As their devotion to the Blessed Mother grew, they decided to build a chapel to house the image.

One couple helping with the construction of the shrine had a baby. They left the child sleeping by a tree while they worked. A bear came, carried the child off and mauled it to death. The couple brought the body of their child back to the image of Our Lady to grieve their loss. While the couple prayed, the child opened its eyes and stretched its arms toward the Blessed Virgin. Their prayer of grief turned into one of thanksgiving.

A number of people witnessed both the attack and the inexplicable resurrection of the child. Word of this miracle spread to neighboring villages, territories and nations, becoming instrumental in establishing the widespread devotion to Our Lady of Quniche that continues to this day.

After a few years, the original chapel wasn’t sufficient for the number of pilgrims pouring in to praise God and beg for favors through the intercession of the Madonna. Over the subsequent centuries, a number of shrines, each one larger than the last, were built to accommodate the growing devotion.

The current sanctuary was consecrated in 1928, and named a Minor Basilica by Pope John XXIII in 1959. The image itself was canonically crowned in 1943, and the Vatican named the shrine a national sanctuary for Ecuador in 1985.

Our Lady of Quinche, pray for us!