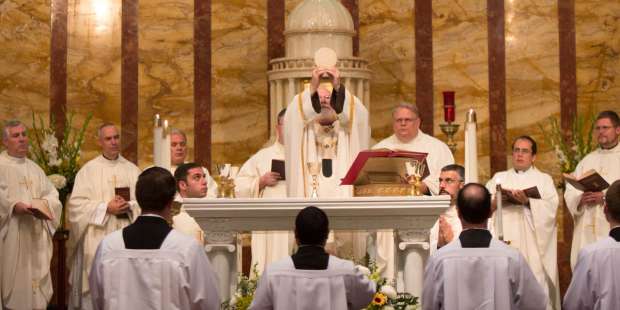 Catholic Home » Q&A » When should Catholics genuflect in a church?

The gesture is performed at specific times and has deep symbolism.

For Catholics in the Roman Rite of the Church, bending the knee to the ground is a common gesture that is steeped in religious symbolism. It is an ancient custom, one that helps Christians pray with both body and soul.

However, it isn’t always communicated to the lay faithful when a person should genuflect. Many know why bending the knee is an important gesture, but we don’t always know when is the proper time and place.

To discover the answer to that, we need to look at the General Instruction of the Roman Missal (GIRM).

First of all, the GIRM states, “A genuflection, made by bending the right knee to the ground, signifies adoration, and therefore it is reserved for the Most Blessed Sacrament.”

This is extremely important as it explains that the genuflection is a gesture ultimately directed towards God, truly present in the Holy Eucharist. We don’t genuflect to people (as some cultures did in the past) or material things, but to God alone.

Next the GIRM explains, in most cases “all who pass before the Most Blessed Sacrament genuflect.” There are a few exceptions to this rule that are spelled out in the GIRM, but those relate to those who are performing some sort of function at Mass.

Outside of those exceptions, it is the general custom in the Roman Rite that you genuflect on one knee whenever you pass before the tabernacle (that contains the Blessed Sacrament). Usually when people enter a Catholic church and walk to their pew they genuflect before sitting down, which is a small gesture of adoration for the One who is present there.

However, its important to note that a genuflection is only necessary when passing the tabernacle. This means a person should look out for the tabernacle, as the tabernacle may not be visibly present, in a side chapel, or even empty. There is no reason to genuflect when entering a church if you don’t walk by a tabernacle. In those cases a simple bow to the altar is appropriate.

Another custom, though not universal in practice, is to genuflect on two knees when the Blessed Sacrament is exposed on the altar in a gold monstrance for public adoration. This is a tradition many are familiar with, but it is optional. It simply recognizes that Jesus is no longer behind a door, but is before everyone in a more visible way.

Besides these instances, there are a few other circumstances when a genuflection is asked for special occasions. For example, it is customary to genuflect before “the Holy Cross from the solemn adoration during the liturgical celebration on Good Friday until the beginning of the Easter Vigil.” During this solemn time of the year the cross receives special attention, and the genuflection gives honor to the sacrifice Jesus made on the cross.

Another time is during the recitation of the Creed on the feast of the Annunciation and Christmas at the words “and by the Holy Spirit was incarnate of the Virgin Mary, and became man.” This is physical gesture is meant to remind the faithful of the reality of the Incarnation and how Jesus descended into the world to become one of us.

In the end, genuflection is a beautiful custom preserved by the Roman Rite which gives honor to the true “King of kings” who is truly present in the Most Blessed Sacrament.