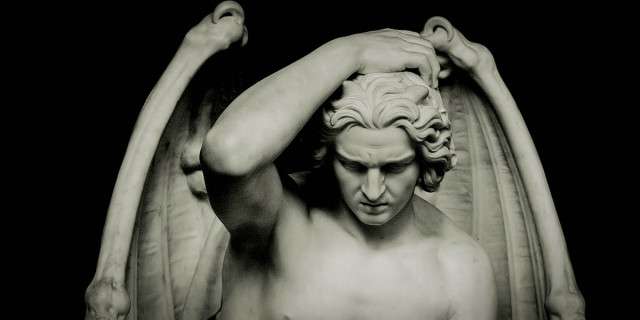 Home » Q&A » Why did Satan rebel against God?

Satan knew what he was doing and yet he still rejected God and his plan.

Catholics believe that the evil spirit known as Satan was a good angel, but openly disobeyed God. His disobedience was so great that he was cast out of Heaven, along with a large cohort of other angels.

Why did Satan disobey? If he was so close to God, what made him rebel?

First of all, the Catechism of the Catholic Church affirms, “The Church teaches that Satan was at first a good angel, made by God” (CCC 391). Initially Satan was good and some traditions go so far as to give him the name Lucifer, or “light bearer,” when he was a bright angel of light (cf. Isaiah 14:12-15).

We know very little about Satan’s activities before his fall. What we do know is that there was a great battle in Heaven, recorded in the book of Revelation.

Then war broke out in heaven; Michael and his angels battled against the dragon. The dragon and its angels fought back, but they did not prevail and there was no longer any place for them in heaven. The huge dragon, the ancient serpent, who is called the Devil and Satan, who deceived the whole world, was thrown down to earth, and its angels were thrown down with it.(Revelation 12:7-9)

Jesus himself also confirms, “I have observed Satan fall like lightning from the sky” (Luke 10:18).

This battle appears to have occurred before the creation of Adam and Eve, as Satan is already present in the garden in his fallen state.

These facts, so far, are all that we can know with certainty. The exact reason of Satan’s fall is unknown to us, though theologians have presented some possibilities.

The Catholic Encyclopediasummarizes a few of the most popular positions.

[T]he sin which by many of the best authorities is regarded as being actually the great offense of Lucifer, to wit, the desire of independence of God and equality with God … Although St. Thomas regards the desire of equality with God as something impossible, he teaches nevertheless that Satan sinned by desiring to be “as God.”[M]any theologians have conjectured, with some show of probability, that the mystery of the Divine Incarnation was revealed to [all the angels], that they saw that a nature lower than their own was to be … united to the Person of God the Son [Jesus Christ], and that all the hierarchy of heaven must bow in adoration before the majesty of the Incarnate Word; and this, it is supposed, was the occasion of the pride of Lucifer.

In this last view, Satan was prideful and thought the Incarnation of Jesus was an abomination. He then sought “independence” and rebelled against this divine plan, desiring to be “as God.”

Whatever the exact nature of Satan’s sin, his choice was irrevocable, as the Catechism explains.

They had full and complete knowledge of their choice, understanding with clarity that it would lead them to eternal separation from God.

The good news is that while on earth, we still have a chance to change our lives and make good choices, not making the same mistake as Satan.