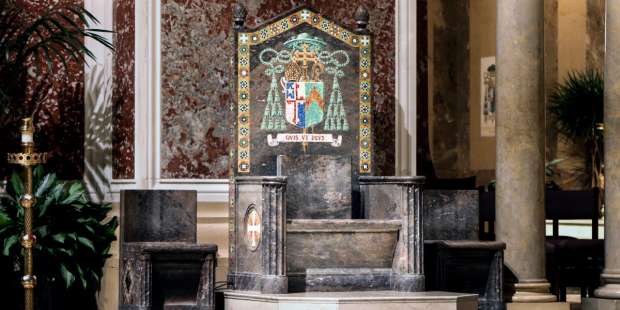 Why do bishops have a special chair?

Home » Q&A » Why do bishops have a special chair?

The “cathedra” that bishops sit on has a long and rich history in the Catholic Church.

When you visit a cathedral church where a bishop regularly celebrates Mass, one of the primary features is a special chair. This chair is called a cathedra (hence the name “cathedral”) and is only used by the bishop during liturgical ceremonies.

The cathedra comes from an ancient tradition in many cultures of a leader or judge ruling from a chair. Teachers would often teach from a chair while their pupils stood and listened. In fact, the term cathedra is sometimes defined as the “professor’s chair.” Additionally, chairs were not mass produced as they are today, so possessing a chair was a sign of power.

Additionally, in the Roman Empire there existed a “curule chair,” which was used solely by magistrates and officials. Since the Catholic Church was born within the Roman Empire, many of the same traditions were shared by the Church hierarchy.

While chairs no longer have that same significance in our modern culture, the cathedra of the bishop still retains spiritual symbolism tied to the office of the bishop.

Pope Benedict XVI explained the symbolism in a homily given on the feast of the Chair of St. Peter.

“Cathedra” literally means the established seat of the Bishop, placed in the mother church of a diocese which for this reason is known as a “cathedral”; it is the symbol of the Bishop’s authority and in particular, of his “magisterium,” that is, the evangelical teaching which, as a successor of the Apostles, he is called to safeguard and to transmit to the Christian Community.

When a Bishop takes possession of the particular Church that has been entrusted to him, wearing his miter and holding the pastoral staff, he sits on the cathedra. From this seat, as teacher and pastor, he will guide the journey of the faithful in faith, hope and charity.

The chair reminds the bishop of his duties to his flock, and its size (since it is usually larger than other sanctuary furnishings) denotes the immense weight that is placed on his shoulders as chief shepherd of the local area. It’s a special honor, one that comes with great responsibility.