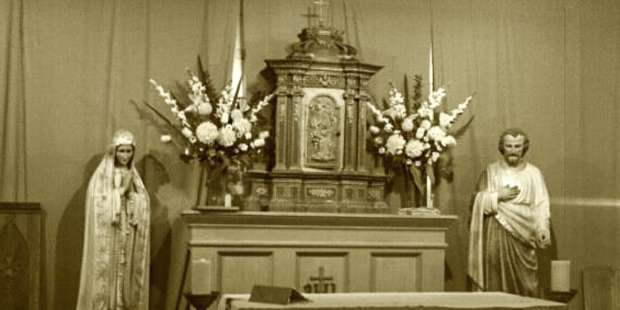 Home » Q&A » Why do churches have Mary on the left and Joseph on the right?

Many churches in the United States have this alignment of statues. Why?

When walking into a Catholic church in the United States (and other places in the world), it is very common to see a statue of the Virgin Mary on the left side of the altar and a statue of St. Joseph on the right.

You may have never noticed it before, but now that it’s been pointed out to you, you’ll see it everywhere.

It’s true that there are no specific norms or rules regarding the placement of statues — the General Instruction of the Roman Missal only notes how, “care should be taken that their number not be increased indiscriminately, and that they be arranged in proper order so as not to distract the faithful’s attention from the celebration itself. There should usually be only one image of any given Saint” (GIRM 318).

In the past there was a custom of placing the statue of the parish’s patron saint in the center of the church, above the tabernacle, but that tradition has decreased recently in favor of a crucifix in the center.

In regards to the placement of Mary, she is typically on the left in light of the fact that placed there, she is on Jesus’ right hand from “his point of view” — from the point of view of someone looking out from the sanctuary.

This is in accordance with the Jewish tradition of having the Queen Mother sit at the right hand of the King. It is narrated in 1 Kings, “Bathshe′ba went to King Solomon, to speak to him on behalf of Adoni′jah. And the king rose to meet her, and bowed down to her; then he sat on his throne, and had a seat brought for the king’s mother; and she sat on his right” (1 Kings 2:19).

Pope Pius X confirms this tradition in Ad Diem Illum Laetissimum by declaring “Mary sitteth at the right hand of her Son.”

Another explanation is due to the fact that the left side of the church was known as the “Gospel Side” of the church and Mary is seen biblically as the “New Eve,” with her pivotal role in Salvation History.

In Eastern churches an icon of the Mother of God is also placed on the left side of the iconostasis that separates the sanctuary from the nave of the church. One commentary explains how, “The Mother of God holds the infant Christ, and represents the beginning of our Salvation.”

St. Joseph’s presence on the right side is then seen in light of Mary’s privileged role. (It is also often the case that another saint is placed there instead of St. Joseph.)

However, if an image of the Sacred Heart is placed on “Mary’s side” then the statue of Mary is placed on “Joseph’s side,” as she takes a less prominent position than her Son.

So while there is no hard and fast rule, the left-right traditional placement was developed over time based on biblical texts and various cultural traditions.