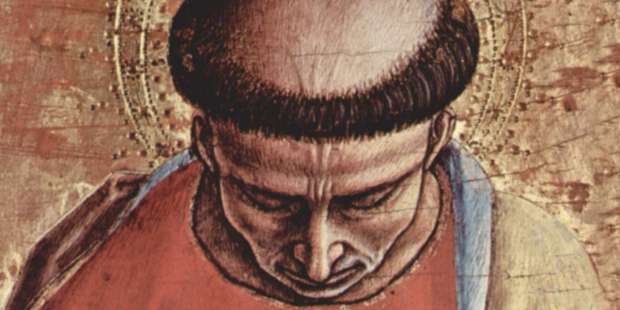 Home » Q&A » Why do monks have strange haircuts?

They are certainly not making a fashion statement.

As Catholic monastic communities evolved, there developed various traditions on how to cut a newly initiated monk’s hair.It may seem like a trivial topic for discussion, but hair is often seen as a prized possession. For example, hair was (and still is) used as an indicator of a person’s status, revealing how high they were in the social hierarchy. Wigs were even developed by the Romans so that particular hairstyles could be easily achieved by wealthy citizens.

Being bald was generally looked down upon in many cultures and seen as some sort of defect. Slaves were typically shaved so as to distinguish them from the rest of society.

In this context monks wanted to show externally the sacrifice they were making by embracing the religious life. After a new monk was permitted to join the community, one of the first ceremonies of initiation was to shave his hair. This symbolized his renunciation of the world and dedication to the religious life.

Additionally, since a shaved head was often associated with slaves, the newly shaved monk became a “slave” of Christ.

During the early centuries of monasticism there arose a discussion regarding the type of shaving, called a “tonsure,” that should be done. According to the Catholic Encyclopedia there existed three different types of tonsure, each connected to a specific apostle.

(1) the Roman, or that of St. Peter, when all the head is shaved except a circle, of hair;

(2) the Eastern, or St. Paul’s, when the entire head is denuded of hair;

(3) the Celtic, or St. John’s, when only a crescent of hair is shaved from the front of the head.

The Celtic style of tonsure proved to be a point of controversy and was dismissed at the Synod of Whitby in 664. The Roman tonsure prevailed and was set as the standard for monastic communities.

This may have been due in part to the symbolism of the Roman tonsure, which was said to represent the crown of thorns that was placed on the head of Jesus. Also, some of the opponents of the Celtic tonsure associated it with Simon Magus, a magician found in the Acts of the Apostles.

Both the Roman and Eastern style of tonsure survive to this day and can be found throughout various religious communities in the Catholic Church.