The entrance procession is highly symbolic, reminding us that our life is a pilgrimage to the heights of Heaven.

In the Roman Rite of the Catholic Church, Mass typically starts with a procession, whether it starts from the entrance of the church or the sacristy. While it may appear to be a practical consideration, the procession does have a spiritual aspect to it.

During the first few centuries after Christianity was legalized in Rome, the pope would frequently gather with his little flock at various points in the city and then process to a different “stational” church. The Catholic Encyclopedia offers a brief description of this early version of the procession.

The pontiff, the clergy, and the people assembled in the appointed church, where the clergy vested and the office was begun…As the procession moved along to the stational church where the Mass was to be offered the Kyrie Eleison and the litanies were sung, from which the procession itself was often called litania.

It was often called a “penitential procession,” and was used as a way to prepare the hearts of those who were to participate in Mass. The physical act of moving from one place to another gave the faithful a chance to get away from the world and enter into something very solemn and moving.

While this action was shortened over the centuries, Mass was always preceded by a smaller procession within the church building. It still retained many of the same features and also became a symbolic gesture that reminded the faithful of their procession or “pilgrimage” to Heaven.

The Catechism of the Catholic Church explains the spiritual symbolism of a pilgrimage.

Pilgrimages evoke our earthly journey toward heaven and are traditionally very special occasions for renewal in prayer. (CCC 2691)

The sanctuary of the church is naturally a place that symbolize heaven, with the presence of Jesus in the Eucharist.

Furthermore, often the sanctuary is elevated by a number of steps. This too has symbolism, lifting up our eyes (and hearts) to God, but also reminding us of Jesus’ ascent to Mount Calvary. The priest assumes this role and ascends to a “mystical” Mount Calvary to offer the sacrifice of the Mass, participating in the one sacrifice of Jesus on the cross.

The next time you attend Mass, try to internalize the entrance procession and use it as an opportunity to prepare your heart for what is about to happen, transporting yourself from this world into the mystical “Supper of the Lamb,” where we hope to be fully united with God for all eternity. 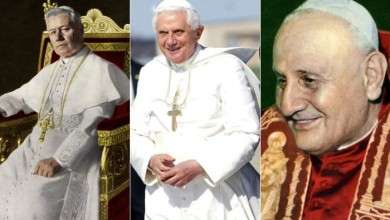 What Is Synodality and Collegiality?