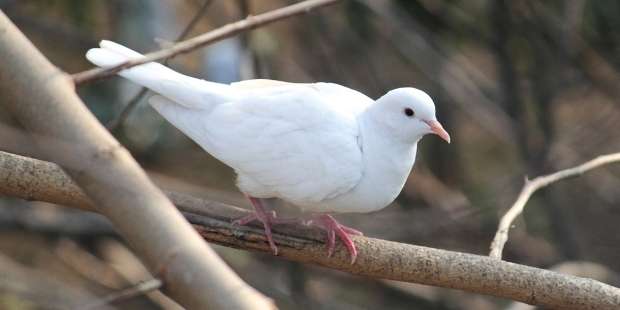 It is one of the most ancient symbols of God, recognized by Jews even before Jesus’ baptism.

In the New Testament, the Holy Spirit is specifically mentioned as coming in the form of a dove. This occurs during Jesus’ baptism where it is written, “the Holy Spirit descended upon him in bodily form, as a dove” (Luke 3:22).Why a dove?

First of all, biblical scholars have pointed out how the Babylonian Talmud likens the Spirit of God that hovers over the waters at creation as a dove, “And the spirit of God hovered over the face of the waters— like a dove which hovers over her young without touching [them].”

This is not explicitly mentioned in the book of Genesis, but is alluded to in some translations where it is written, “the Spirit of God was moving over the face of the waters” (Genesis 1:2).

Secondly, a dove was sent out by Noah in search of land after the waters of the flood stopped. Genesis recounts how, “the dove came back to him in the evening, and lo, in her mouth a freshly plucked olive leaf” (Genesis 8:11). This episode is directly connected to Jesus’ baptism as the flood is seen in Christianity as a type or prefigurement of baptism.

Third, in a pagan context, doves were seen in the ancient world as representative of the divine. It was very common for gods or goddesses to be surrounded by doves.

As a result, by the time of the New Testament, doves were already very much associated with God and specifically his Spirit. Early Christians readily accepted this imagery and soon after began depicting the Holy Spirit almost exclusively as a dove.

The dove is seen in Christian art not only at the baptism of Jesus, but also in various biblical episodes such as the Annunciation, when Mary was greeted with the news that she would bear the Son of God. Some of the first tabernacles that contained the Eucharist were fashioned in the form of a dove suspended over the altar.

The dove, with its pure white feathers, calls to mind the purity of God, and its swift flight in the air reminds us of the many movements of the Holy Spirit in our soul. It is a beautiful image, one that has lasted throughout the centuries.