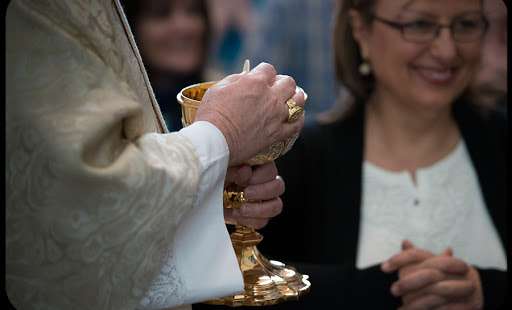 Question: I am active in many faith-based organizations which provide services such as KAIROS prison ministry. At some of these a communion service is offered. I have been told that communion by someone other then an ordained priest, from the lineage of Peter, is not communion and there is no problem. It is just a symbol and not a real communion. What is the ruling on taking communion at these services?

Answer: In some of the various Protestant and Evangelical congregations, their belief regarding communion is very close to what Catholics believe. However, only a priest ordained by a bishop who has authentic apostolic authority can effect the change of bread and wine into the real body, blood, soul, and divinity of Christ. Which means that these congregations, even though they believe they are receiving the Real Presence, are not actually doing so. They are receiving a piece of bread and some wine.

In most of the Protestant, Evangelical, and non-denominational congregations, however, not only do they not have a validly ordained priest, but they also do not even believe in the Real Presence. Their communion service is meant to be merely a symbol.

So, either way you look at it, it is essentially correct to say that in the Protestant, Evangelical, non-denominational, and other such communities, communion, or the Lord’s Supper, is merely a symbol. The question is, does that make it okay for Catholics to receive? The answer is: No, it does not.

In a marriage, the physical union of husband and wife is the sign and the symbol of union between the two. If there is no union — no lifelong commitment — then the sign of union should not take place. Which means sex outside of marriage is a lie — you are saying with your bodies that a union exists, that a commitment has been made, when no such union actually exists.

The same holds when you receive communion in a non-Catholic faith tradition. You are saying, with your body, that you believe as they believe. You are telling everyone present that there is essentially no difference between what they believe about communion and what you, as a Catholic, believe about Communion. You are telling a lie with your body. That is why Catholics should not receive communion, or the Lord’s Supper, outside the bounds of the Catholic Church.