There’s a reason that September 12 is dedicated to this unique feast.

Why do we honor the name of Our Lady and hold it in such high esteem? Why not just honor her as the Blessed Virgin Mary, the Mother of Jesus? Why did Pope Innocent XI, in 1683, proclaim that September 12 is the Feast day of the Most Holy Name of Mary? (Pope St. John Paul II reinstituted the feast in 2003 as an “optional memorial.”)

The name Mary has its origins in ancient languages. In Aramaic, Maryam; Old Testament Greek, Mariam; Hebrew, Myriam; and from the New Testament Latin, Maria.

The feast day of the Most Holy Name of Mary originated in 1513 in Cuenca, Spain. At the time it was a local celebration and was held on September 15.

In 1587, Pope Sixtus V moved the feast day to September 17. In 1622, Pope Gregory XV expanded the feast to the Archdiocese of Toledo, and in 1671, the entire kingdom of Spain was included.

But in the year 1683, this feast day was inserted into the Roman Calendar. That was when Pope Innocent XI made it a feast everywhere in the Catholic world. The feast was designated to be celebrated on September 12, four days after the birthday of Our Lady.

Because of what’s known as the Battle of Vienna, recognized as a turning point in history and the end of the expansion of the Ottoman Empire into Europe.

In 1683, the army of the Ottoman Empire had marched through Hungary. Now on Austria’s border, it was preparing to vanquish Vienna. The papal nuncio and King Leopold of Austria pleaded with King Jan Sobieski of Poland to help them stop the invading Ottomans. King Sobieski immediately agreed to help. He had beaten back the invaders a few years before, and although the army he commanded was small, he was undeterred.

On his march to Austria, King Sobieski and his army passed by the Shrine to Our Lady of Czestochowa. The King pleaded with the Blessed Mother by invoking her name. He asked for her blessing and intercession.

The allied forces went on to win against the Ottomans and King Sobieski triumphantly entered Vienna on September 12. He attended Mass and praised the Blessed Virgin as the cause and reason for their great victory.

Pope Innocent XI thereupon declared September 12 as a date to honor the Most Holy Name of Mary, whose motherly intervention had saved Christendom.

“O most holy Virgin Mary, your name is so sweet and admirable that one cannot say it without becoming inflamed with love toward God and You.”

“However hardened and diffident a heart may be, the name of this most Blessed Virgin has such efficacy, that if it is only pronounced that heart will be wonderfully softened.” 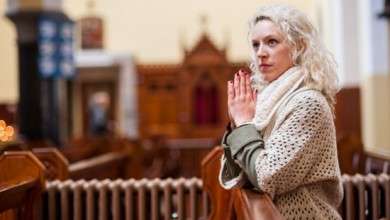 The Stunning Anti-Catholic Lie that Makes Pope a Devil Worshipper