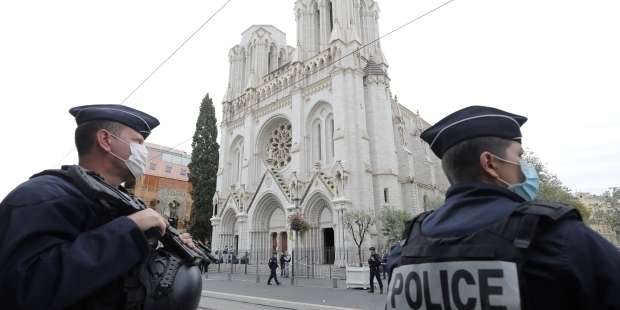 “One cannot separate these [terrorist] acts from the violent drift of our contemporary world,” reflected Msgr. Bruno-Marie Duffé, secretary of the Vatican’s Dicastery for Promoting Integral Human Development, after the Islamist attack at the Basilica of Nice.The French prelate—who assists Pope Francis in the drafting of catecheses and of the World Day of Peace message distributed each year on January 1—calls for all people to “build fraternity based on mutual respect and consideration,” he told I.Media.

“We are all affected, in the Church and in society,” Msgr. Duffé said. “This type of act is on the order of suicide; these individuals are lost.”

He suggested that they express “a hatred and despair that they cannot master and therefore they’re no longer able to measure the value of a life.” A life then becomes “negligible and scorned for the benefit of a cause. I see this as an expression of madness.”

But “we cannot separate these [terrorist] acts from the violent drift of our contemporary world,” he believes. “The effects of injustice and inequality produce violent reactions … We don’t talk to each other anymore; political leaders have reached an impasse,” the prelate said.

“The challenge of fraternity,” expressed in Pope Francis’ encyclical Fratelli tutti, “stands before us more than ever.”

For this close advisor to the pontiff, what’s needed is “building fraternity based on mutual respect and consideration.”

“If they are capable of killing, it is because we’ve lacked fraternity in past decades,” he says. Consequently, it’s no longer a question of “formulating a pious wish for fraternity, but of expressing a real urgency for fraternity.”

At the same time, it is essential to “measure what we write and draw by reflecting on the effects on fragile psychic structures, weakened by poverty, injustice and loneliness.”

“We must be careful what we say,” although it’s not a question of restricting freedom, he says, but of using it wisely: “Freedom takes other people into account.”

“This is not a new principle, it is recurrent in all forms of speech and expression, whether public or artistic.”

Finally, Msgr. Duffé exhorted the French to pray during the confinement decreed in France: “We must resist by praying; prayer is stronger than anything else.” He invites families to “set aside a time of recollection to bear the pain of men and women deprived of life and hope.”