The satanic Temple is working to overturn a Texas law which ensures the right of unborn children to be cremated or buried. According to the satanists, burying a murdered child is an affront to their sincerely held religious beliefs.
When we die, as we must, we expect to be cremated or buried. We hope for the rite of Christian burial and for our bodies to be kept whole and left in peace. However, this reasonable request appears to be too much for satanists.
In a statement, the satanists have declared their members will not comply with the new state law that affords cremation or burial for child victims of abortion.
Of course.
The satanists ground their objection in the ‘inviolability of the human body’ which suggests that what happens to your body must be your choice and yours alone.
The fact is, abortion impacts two bodies, not just one. The unborn child has a body, which science and common sense readily affirms. So if the baby is a second body, why should that body not be given the respect of cremation or burial?
Per the satanists’ own rule, they should be opposed to abortion, which violates the body of a child in the worst possible way.
The satanic Temple says they are basing their objection to the law in the First Amendment. In a release from the group, “The First Amendment protects our right to practice our beliefs, and under the Religious Freedom Reform Act (RFRA), the State must present a compelling reason for why they want to enforce rules that inhibit adherence to our religious practices.”
Obviously, the satanists subscribe to a twisted view of reality, shaped by their obsession with evil. Thankfully, good, not evil, is the basis of our law and our society. We pray these people will not be allowed to overturn a law which extends the decency of burial to our unborn children.

EDITOR’S NOTE: The name of satan has been intentionally left uncapitalized.
By David Drudge

Pope Francis Condolence to Victims of Bus Crash in French

Argentina’s March for Women became an attack on the Church 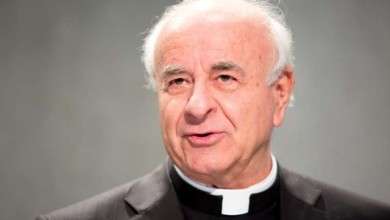 Archbishop Paglia says priests can be present at assisted suicide