Why do priests wear black? Where does the cassock come from?   A reader in Alexandria.

Over the centuries Church clerics were required to wear distinctive garb to identify them as ordained clergy. Particular dioceses or national bishops’ conferences in various countries have established the norms for such clerical attire.

In the early Church, no distinctive garb seems to have been worn, except of course liturgical vestments, which in some cases were also worn outside the celebration of sacraments. For instance, sometimes bishops and priests wore the chasuble like regular clothing, as did the deacons with the dalmatic. By the 6th century clerics and nobility retained the traditional Roman style of clothing of a long tunic and cloak. The male laity began wearing a short tunic, breeches, and mantle  clothing introduced by the barbarian tribes. Also at this time (6th century) the cassock as we know it originated in France and was given the Latin name “pillicia” (or “pelisse” in early French), meaning skin or hide. The name signifies that the long tunic was lined with fur to provide warmth, sorely needed in the unheated stone churches, especially during the winter season. However, others besides clerics wore these garments. The use of the long tunic from neck to feet also reflected a stress on modesty.

From the 6th century onward, many local synods passed regulations forbidding clerics from wearing richly styled clothing, light or skimpy clothing, bright colors, and extravagant ornaments and jewelry. The Council of Braga in Portugal (572) was one of the first such synods to mandate that clergy wear a tunic reaching to the feet. Responding to reports of laxity in Britain, Pope John VIII (c. 875) admonished the Archbishops of Canterbury d York to insure their clergy wore proper attire, particularly long tunics. In the Middle Ages, the dress of clergy began to be regulated by canon law with other specific regulations passed by local synods. The Fourth Lateran Council (1215) decreed that clerics must wear garments closed in front and free from extravagance. Around this time, the cassock became the distinct garb of the clergy alone. It was given the French name “soutane” (derived from Medieval Latin/Early Italian “sottana,” which means beneath, referring to the fur linings). The English speaking people adopted the word cassock, derived from early French “casaque.”

Eventually, the Church passed more stringent regulations. Pope Sixtus V in 1589 proscribed penalties for those clerics who did not wear the cassock (officially called in Latin “vestis talaris”). Pope Urban VIII in 1624 mandated that a cincture be worn with the cassock and the cloak worn over the cassock be of the same length. During the Pontificate of Clement XI, another decree in 1708 allowed the wearing of a shorter cassock (technically the frock coat, sort of the a Nehru jacket) for travel purposes, especially riding horses. In 1725, Pope Benedict XIII forbade clerics to wear civilian attire. For the United States, the Third Plenary Council of Baltimore (1884) promulgated regulations for clerical attire as follows: “We wish and enjoin all keep the law of the Church. and that when at home or when engaged in the sanctuary they should always wear the cassock which is proper to the clergy. When they go abroad for duty or relaxation’ or when upon a journey, they may use a shorter dress, but still one that is black in color, and which reaches to the knees, so as to distinguish it from lay costume. We enjoin upon our priests as a matter of strict precept, that both at home and abroad, and whether they are residing in their own diocese or outside of it, they should wear the Roman collar.”

In recent times, the regulations have become more relaxed. While many priests wear the traditional cassock for Mass, the distribution of Holy Communion or in performing other priestly duties around the parish, a regular suit with clerical collar or a clerical shirt have become common place, especially in activities beyond the physical confines of the parish or in daily duties.

The symbolism of the cassock is as follows; The Roman collar symbolizes obedience; the Sash or cincture around that waist, chastity; and the color black, poverty. Moreover, black is a color of mourning arid death for the priest, the symbolism is dying to oneself to rise and serve the Lord as well as giving witness of the Kingdom yet to come. The Code of Canon Law still requires “clerics are to wear suitable ecclesiastical garb in accord with the norms issued by the conference of bishops and in accord with legitimate local custom” (No. 284). In our very secular world, the wearing of clerical garb continues to be a visible sign of belief and of the consecration of one’s life to the service of the Lord and His Church. 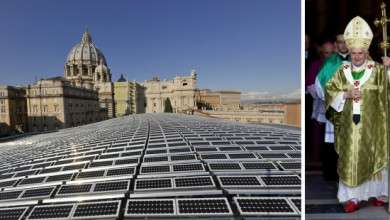