Some explanations from traditional biblical hermeneutics shed light on the matter, as do Pope Benedict’s thoughts on recent history and current events.

In chapter 13, verse 18 of John’s Book of Revelation, one reads:

“This calls for wisdom. Let the person who has insight calculate the number of the Beast, for it is the number of a man. That number is 666.”

On March 15, 2000, while still the Prefect of the Congregation for the Doctrine on the Faith, then-Cardinal Joseph Ratzinger spoke during the inauguration of the Third Diocesan Week of Faith in the Cathedral of Palermo, in Sicily, in front of around 1,500 people. That speech — not as well known as his famous Regensburg Address — is now commonly referred to as Ratzinger’s conference on Fatherhood and Apocalypse.

In this conference, Ratzinger warned the audience about the dangers of biotechnology, explaining that the reduction of human fatherhood to a biological phenomenon, depriving it of its human and spiritual dimensions, is a threat that empties all statements one might say about God the Father. “The dissolution of fatherhood and motherhood,” he explained, “is linked to the dissolution of our being sons and daughters.”

Now, what does this might have to do with the apocalyptic number of the Beast? Ratzinger’s argument explains that God’s antagonist, the Beast, is the only character in the Bible who doesn’t have a name, but a number. In the biblical revelation, the watchful presence of God reveals itself with a name and, one might even argue, in a name. This act, Ratzinger argues, signifies God’s desire to be addressed, to enter into communion. God’s antagonist, “this Beast,” Ratzinger explains in the same conference, “does not have a name, but a number […] The Beast is a number and transforms into numbers.”

Some authors have read this as Ratzinger’s critique of instrumental reason. The then-cardinal was clearly referring to the experience of the concentration camps, but also to the risks of understanding the human in terms of mere bio-mechanical functions:

“In their horror [concentration camps] cancel faces and history, transforming man into a number, reducing him to a cog in an enormous machine. Man is no more than a function (…) In our days, we should not forget that they prefigured the destiny of a world that runs the risk of adopting the same structure of the concentration camps, if the universal law of the machine is accepted. The machines that have been constructed impose the same law. According to this logic, man must be interpreted by a computer and this is only possible if translated into numbers. The Beast is a number and transforms into numbers. God, however, has a name and calls by name. He is a person and looks for the person.”

Now, as it happens with Hebrew gematria (that is, the assigning of numerical value to the letters of the alphabet), Greek letters might also have a corresponding numerical value. That’s what is known as isopsephy. The use of isopsephy to “calculate” the number of the Beast helped a whole theological and hermeneutical tradition understand the number 666 as being equivalent to the name and title of Nero Caesar, who was the Roman Emperor from the year 54 until 68. His name, written in Aramaic, can also be “calculated” as equivalent to 666 using traditional Hebrew gematria. In fact, “Nero Caesar” in Hebrew reads נרון קסר (NRON QSR). This spelling, when used as numbers, represents 50-200-6-50-100-60-200, which adds up to 666.

Historians have understood that this was the way in which early persecuted Christian communities could speak against the emperor without the Roman authorities knowing so. But this explanation doesn’t render Ratzinger’s argument as invalid, simply because Nero was an actual historical person. What the number of the Beast reveals is that the dissolution of personal traits, the substitution of names for statistics, the reduction of the human to any of its basic functions (as in the reduction of fatherhood to just a biological phenomenon, deprived of its spiritual and moral dimension; or as in the reduction of the refugee crisis to mere statistics) sooner or later runs the risk of leading to dehumanization. 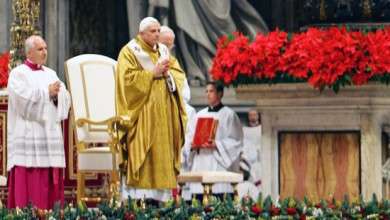 Yes, Christians Do Have an Assurance—but Not an Absolute Assurance—of Salvation

What an Ad Hominem Argument Is Not