Recently I got a query from someone wondering about an anti-Catholic video that claimed “the pope’s deacon” invoked Lucifer during the Easter Vigil liturgy and referred to Jesus as his Son.

Of course, that’s not what happened, but to understand what really did happen, you need to know a few things about “lucifer.”

What does the word lucifer mean?

It’s a Latin word derived from the roots lux (light) and ferre (to carry).

It means “light-bearer” or “light-bringer,” and it was not originally used in connection with the devil.

Instead, it could be used in multiple ways. For example, anybody carrying a torch at night was a Lucifer (light bringer).

Venus is also known—in English—as the Day Star because it can be seen in the day.

Because the sight of it in the morning heralds the light of day, it was referred to by Latin speakers as the “light-bringer” or lucifer.

So there was no connection with the devil?

No. In fact, it was used as an ordinary name. In the 300s, St. Lucifer of Cagliari was a defender of the deity of Christ and of St. Athanasius against the Arians.

Another bishop in the 300s—Lucifer of Siena—also bore this name.

Is the symbol of the Morning Star used in any surprising ways?

Yes. The Bible uses it as a symbol for Jesus Christ. In the book of Revelation, we read:

“I Jesus have sent my angel to you with this testimony for the churches. I am the root and the offspring of David, the bright morning star” (Rev. 22:16).

(Spoiler alert! This is going to play a key role in what we have to say about the liturgy.)

So we shouldn’t freak out just because we see references to the words “Lucifer” or “light-bringer” or “morning star”?

Correct. These terms have no intrinsic connection to the devil. In fact, they may be used—as in Scripture itself—as symbols of Jesus Christ.

How did this word get connected with the devil?

It’s based on a passage in the book of Isaiah. Chapter 14 of that book contains a taunt (a kind of ancient insult song or poem—like you might find at a modern rap battle) against one of the oppressors of Israel: the king of Babylon.

It predicts his downfall, but it also depicts his pride, which sets him up for the downfall:

How you are fallen from heaven,

In the Latin Vulgate, that’s:

The king of Babylon thus fancies himself as something high and mighty—like the Day Star itself—but God brings him low in the end.

In this passage, the reference to the Day Star/the Morning Star/Lucifer is thus an ironic allusion to the king of Babylon’s prideful self-image.

But surely we’re talking about the human king of Babylon, not the devil. Doesn’t the passage refer to him as a man who dies?

Yes. This passage explicitly refers to the king of Babylon as a man (Heb., ’ish) who conquered kingdoms:

Those who see you will stare at you, and ponder over you:

“Is this the man who made the earth tremble, who shook kingdoms, who made the world like a desert and overthrew its cities, who did not let his prisoners go home?” (Is. 14:16-17)?

It also refers multiple times to his decay after death and how he will not lie in his own tomb!

Your pomp is brought down to Sheol, the sound of your harps;
maggots are the bed beneath you, and worms are your covering” (Is. 14:11).

All the kings of the nations lie in glory, each in his own tomb;
but you are cast out, away from your sepulcher, like a loathed untimely birth (Is. 14:18-19).

So we’re talking about a human king—at least in the literal sense of the text.

How did this passage get connected with the devil?

Some of the early Church Fathers took it that way.

They compared the pride that the king of Babylon displays in the passage—“I will ascend above the heights of the clouds, I will make myself like the Most High” (Is. 14:14)—with the pride of the devil.

They also compared the fall of the king of Babylon to Jesus’ statement that he “saw Satan fall like lightning” (Luke 10:18)—though in the context that passage refers to the defeat of the devil in the ministry in which the apostles had just engaged.

It is legitimate to use the spiritual sense of this text as an application to the devil, but many people have lost sight of the literal sense of the text, which applies to the human king of Babylon.

Worse, in the popular mind, “Lucifer” has simply become a name for the devil, and that causes problems when people who are familiar with only this use encounter other uses of the term—as in the Latin liturgy.

Is this just a Catholic interpretation?

No. In fact, the Protestant Reformers Luther and Calvin acknowledged it.

12. How you are fallen from heaven, Lucifer! This is not said of the angel who once was thrown out of heaven but of the king of Babylon, and it is figurative language. Isaiah becomes a disciple of Calliope and in like manner laughs at the king. Heylel [the Hebrew word used in the text] denotes the morning star, called Lucifer, and the son of Dawn. “Heaven” is where we are with our heads, and that is obviously above the ground, just as that most powerful and extremely magnificent king was once above, but now his lamp is extinguished (Luther’s Works 16:140; Preface to the Prophet Isaiah, ch. 14).

Calvin was quite hostile to the application of this passage to the devil, writing:

12. How art thou fallen from heaven! Isaiah proceeds with the discourse which he had formerly begun as personating the dead, and concludes that the tyrant differs in no respect from other men, though his object was to lead men to believe that he was some god. He employs an elegant metaphor, by comparing him to Lucifer, and calls him the Son of the Dawn; and that on account of his splendor and brightness with which he shone above others.

The exposition of this passage, which some have given, as if it referred to Satan, has arisen from ignorance; for the context plainly shows that these statements must be understood in reference to the king of the Babylonians. But when passages of Scripture are taken up at random, and no attention is paid to the context, we need not wonder that mistakes of this kind frequently arise. Yet it was an instance of very gross ignorance, to imagine that Lucifer was the king of devils and that the Prophet gave him this name. But as these inventions have no probability whatever, let us pass by them as useless fables (Commentary on Isaiah at 14:12).

So what have anti-Catholics claimed about the Easter Vigil liturgy?

Some have claimed that “the pope’s deacon” invoked Lucifer and described Jesus as the devil’s Son.

This claim is based on translating part of the Easter Vigil liturgy this way:

I say O Lucifer, who will never be defeated.

Christ is your Son, who came back from Hell;

shed his peaceful light and is alive and reigns in the world without end.

The pope does not have a personal deacon, though deacons can sing the part of the Easter Vigil liturgy known as the Exsultet, Easter Proclamation, or Paschal Proclamation. (Exsultet is its first word in Latin: “Let them exult!”)

You can read about it here.

The Exsultet is part of a ceremony involving the paschal candle, which symbolizes the light of Christ.

In Latin, the relevant part of the Exsultet reads:

In good English (as opposed to the incompetent translation given by the anti-Catholic commentator), this means:

we pray you that this candle,

hallowed to the honor of your name,

to overcome the darkness of this night.

Receive it as a pleasing fragrance,

and let it mingle with the lights of heaven.

May this flame be found still burning by the Morning Star:

the one Morning Star who never sets,

who, coming back from death’s domain,

has shed his peaceful light on humanity,

and lives and reigns for ever and ever.

Up to the first reference to the Morning Star, this passage of the Exsultet is asking God to let the paschal candle continue to give light, so that it still be burning in the morning (“May this flame be found still burning by the Morning Star”).

Then the prayer pivots to reconceive the Morning Star not as the literal one in the sky but as Jesus Christ himself, based on the symbol in Revelation 22:16 (“the one Morning Star who never sets, Christ your Son”).

It is a moving, poetic prayer to God—not an invocation of the devil.

This article was written by Jimmy Akins and first appeared on Catholicsay Nov 9, 2019 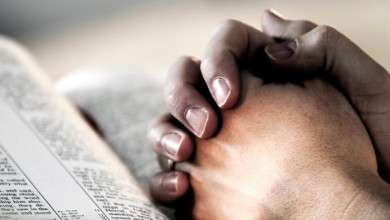 How can Muslims worship the same God as Christians? 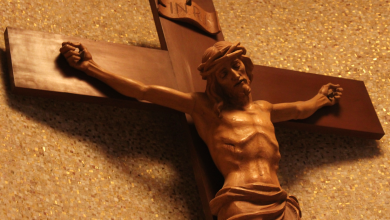