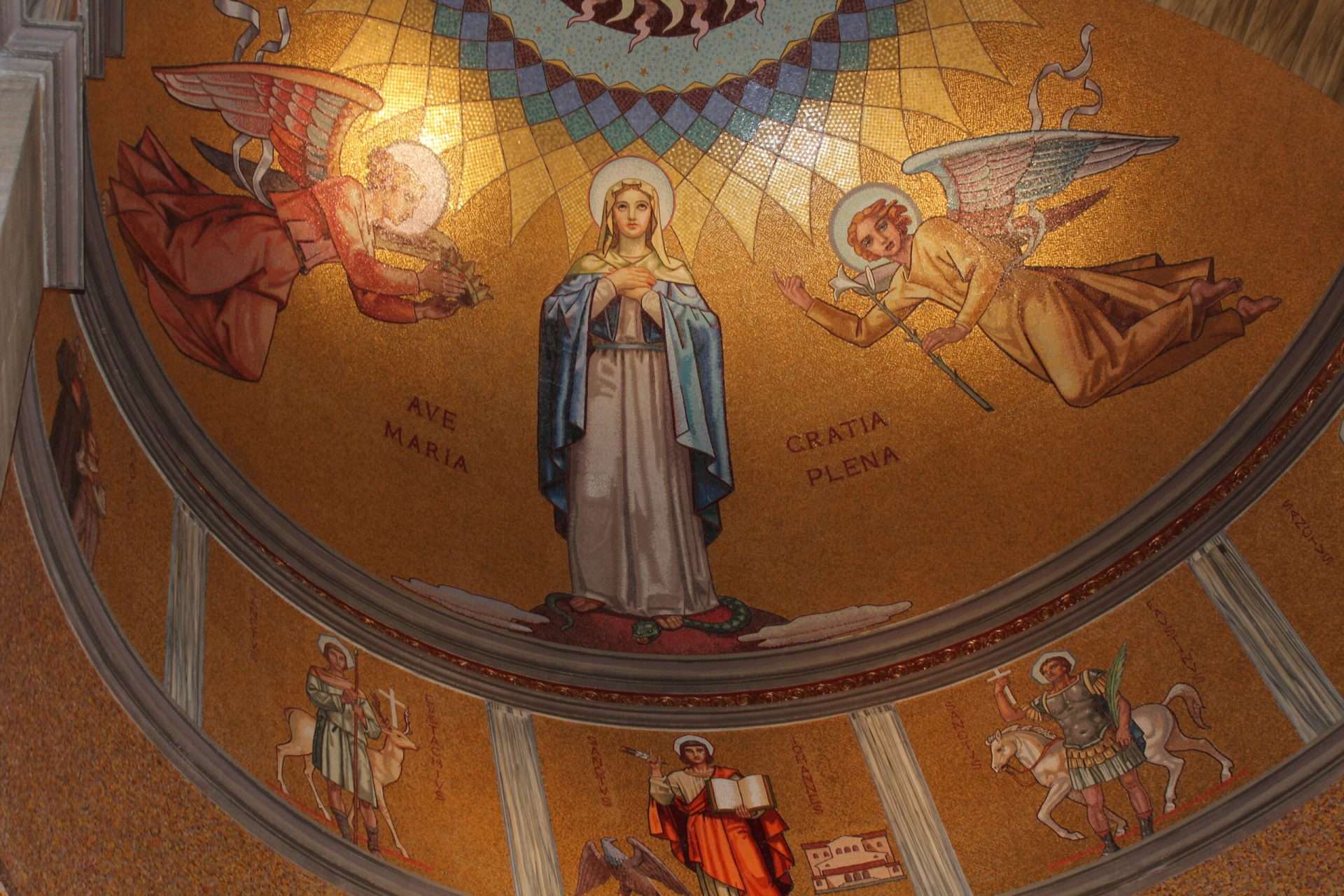 What the immaculate conception is and what it is not:

Many people confuse the Immaculate conception with the “Virgin Birth,”; which means that Christ was conceived in the womb of Mary without any intervention of a human father. Others think that the Immaculate Conception means that Mary was conceived the same way as Christ: through the power of the Holy Spirit and without a human father. But neither of these is true. Immaculate conception means that Mary, who was conceived the regular way (Father and mother), was preserved from every taint of Original Sin (from the moment of her conception, not at birth) and was infused with Sanctifying Grace. “Original Sin” essentially means the absence of this Grace, and Mary didn’t have a problem with that since she was always “full of grace.”

Full of Grace; the greeting of Angel Gabriel:

The phrase “full of grace” is translated from Greek kecharitomene. This word is more of a proper name of the person addressed, so it expresses a characteristic quality of the Blessed Mother.

More recent translations differ from the traditional kecharitomene,. Some go with “highly favored daughter,” and although one can call Mary that, but the translation is watered down from what the original Greek actually means. It leaves out the fact that this word kecharitomene, has charis at its core and is of a singular and permanent nature. This indicates that Mary was a perfection of Grace. Not only was she found at the time to be full of Grace, she as herself always full of God’s Grace: a perfect ark to carry a perfect God.

“Through the centuries, the Church has become ever more aware that Mary, “full of grace” through God, was redeemed from the moment of her conception. That is what the Dogma of the Immaculate Conception confesses, as Pope Pius IX proclaimed in 1854:

‘The most Blessed Virgin Mary was, from the first moment of her conception, by a singular grace and privilege of almighty God and by virtue of the merits of Jesus Christ, Savior of the human race, preserved immune from all stain of original sin'”.

Does this mean Mary didn’t need a Savior?:

Christ saved everyone. The power of God transcends time and space. So that while I am typing these words, God is applying the merits of the passions of Christ from thousands of years ago to my life and those of the faithful. I am able to go to Mass, receive communion and watch the reenactment of that same Calvary Sacrifice. From the moment of her conception, Mary was saved too from Original Sin and kept safe all her life from all taint of imperfection.

This was done in anticipation of the Passions of Christ. So that before Christ was born, his merits saved the Virgin Mary, and after he had gone, his merits continues to save us. Just as we are baptized, and consequently cleansed of Original Sin, and receive Sanctifying Grace. Mary was infused with this Grace from the moment of conception. She was, in a sense, “Baptized” by God. But the difference is, we continue to struggle with sin even after baptism while she went throughout her life without sinning.

Mary needed to be saved in a different way than us. Having been born, we need Christ to make us holy, and she needed Christ so she could stay holy. Still, she needed a savior.

The “splendor of an entirely unique holiness” by which Mary is “enriched from the first instant of her conception” comes wholly from Christ: she is “redeemed, in a more exalted fashion, by reason of the merits of her Son”. The Father blessed Mary more than any other created person “in Christ with every spiritual blessing in the heavenly places” and chose her “in Christ before the foundation of the world, to be holy and blameless before him in love”.

She is much more than other “highly favored” women. Mary is “full of grace”:

Throughout the Old Covenant, the mission of many holy women prepared for that of Mary. At the very beginning there was Eve; despite her disobedience, she receives the promise of a posterity that will be victorious over the evil one, as well as the promise that she will be the mother of all the living. By virtue of this promise, Sarah conceives a son in spite of her old age. Against all human expectation, God chooses those who were considered powerless and weak to show forth his faithfulness to his promises: Hannah, the mother of Samuel; Deborah; Ruth; Judith and Esther; and many other women. Mary “stands out among the poor and humble of the Lord, who confidently hope for and receive salvation from him. After a long period of waiting the times are fulfilled in her, the exalted Daughter of Sion, and the new plan of salvation is established.”

A post we made on the Immaculate conception years ago:

A good sister asked for “evidence” for the validity of the immaculate conception dogma.

God only dwells in the holiest of places, and if he ever came into the womb of Mary (which he did), he must have prepared it free from every stain of sin. Her womb, like heaven, became unstained with even the slightest taint of original or actual sin.

Again if Jesus were to save us from sin, he too would not be affected by original sin. If Mary were affected by original sin, then Christ too would have suffered this and would therefore be unable to save us since he would be in this sin with us. However, if Christ would save, he needed to be outside this pit of sin to draw us out of it. And Mary’s immaculate conception was a way for Christ to be free from this sin and be in a good position to pull us from it. Not that Christ could have ever been under sin, this is just theoretical. Plus, he also has revealed this truth to the Church over the years.

When the inquirer asked, “So the Dogma is based on assumption?”

The matter is apparent; God has given us the power to discern what he will and won’t do; this kind of argument is drawn from REASON. God also has given us the gift to believe what he says to us even if we do not understand them; this is called FAITH.

The Dogma of the immaculate conception is supported by reason and is revealed by God himself (Faith). The Faith of the Church is that God who is all Good, Perfect, cannot have any taint of sin, and since he has all the power, he actually makes it that sin has no place in his incarnation; this is simple logic. He also has revealed this truth to his Church by the Magisterial Authority bestowed upon her.