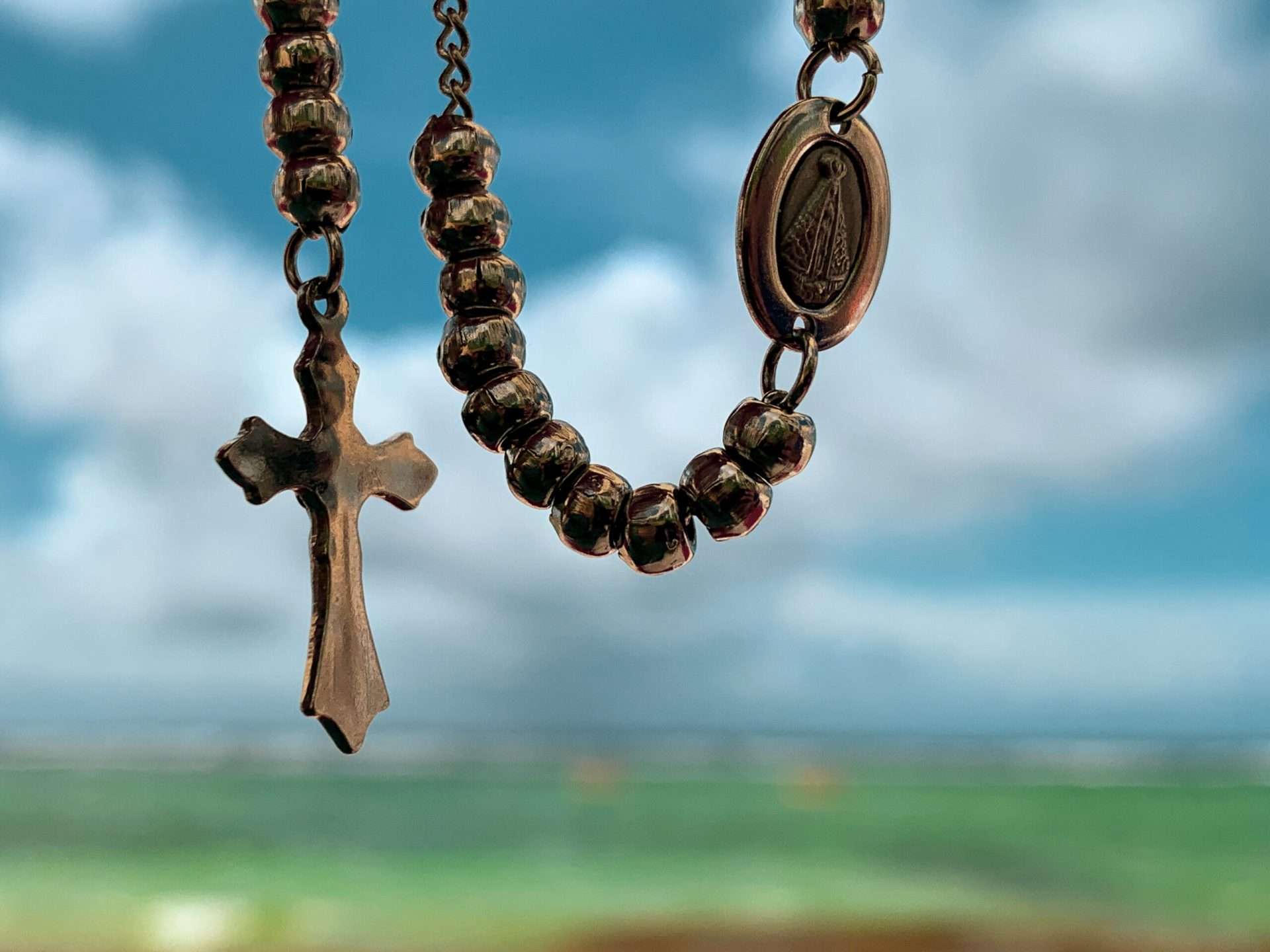 Home » Articles » You could be saying the Rosary wrong: an explanation and beautiful story

One of the reasons many Protestants don’t like the Rosary is it is Mary-centric. Another reason is, the repetition, they believe it is against the word of Christ to not speak in many words.

However, there’s no reason to worry about the former since even the Apostles appealed to Mary for help severally as recorded in the Bible and recounted by Saints. We also know Mary isn’t dead since “the Lord is God of the living and not of the dead”  (Mark 12:27). So if the Saints asked for her help, and she is alive before God, it is perfectly okay to ask for help since we are united with her in a most wonderful way. The latter isn’t an issue too because asking God for help repeatedly isn’t considered “repetition”. The Rosary is a deeply meditative prayer which helps enter into the mysteries of Faith and share in the life of God.

There is a problem, however: Many people aren’t as present as should while praying the Rosary. They do not reflect enough on these mysteries or pray attentively. Here’s a snippet from St Louis de Montfort’s “The Secret of the Rosary“:

Here is his explanation plus a story:

“WHEN YOU have asked the Holy Spirit to help you pray well, put yourself for a moment in the presence of God and offer up the decades in the way that I am going to show you later. [See Chapter 50.]

Before beginning a decade, pause for a moment or two—-depending upon how much time you have—-and contemplate the mystery that you are about to honour in that decade. Always be sure to ask of Almighty God, by this mystery and through the intercession of the Blessed Mother, one of the virtues that shine forth most in this mystery or one of which you stand in particular need.

Take great care to avoid the two pitfalls that most people fall into during the Rosary. The first is the danger of not asking for any graces at all so that if some people were asked their Rosary intention they would not know what to say. So, whenever you say your Rosary, be sure to ask for some special grace. Ask God’s help in cultivating one of the great Christian virtues or in overcoming one of your sins.

The second big fault a lot of people make when saying the Holy Rosary is to have no intention other than that of getting it over as quickly as possible! This is because so many of us look upon the Rosary as a burden which is always heavier when we have not said it especially if it is weighing on our conscience because we have promised to say it regularly or have been told to say it as a penance more or less against our will.

It is really pathetic to see how most people say the Holy Rosary they say it astonishingly fast and mumble so that the words are not properly pronounced at all. We could not possibly expect anyone, even the most unimportant person, to think that a slipshod address of this kind was a compliment and yet we expect Jesus and Mary to be pleased with it! Small wonder then that the most sacred prayers of our holy religion seem to bear no fruit, and that, after saying thousands of Rosaries, we are still no better than we were before! Dear Confraternity members, I beg of you to temper the speed which comes all too easily to you and pause briefly several times as you say the Our Father and Hail Mary.

I have placed a cross at each pause, as you will see:

Our Father Who art in Heaven, + hallowed be Thy name, + Thy kingdom come, + Thy will be done  + on earth as it is in Heaven.  + Give us this day CROSS our daily bread CROSS and forgive us our trespasses  + as we forgive those who trespass against us, CROSS and lead us not into temptation CROSS but deliver us from evil. Amen.

Hail Mary, full of grace, + the Lord is with Thee, + blessed art thou among women + and blessed is the Fruit of Thy womb, Jesus. +

Holy Mary, Mother of God, + pray for us sinners, now + and at the hour of our death. Amen.

At first, you may find it difficult to make these pauses because of your bad habit of saying prayers in a hurry; but a decade that you say recollectedIy in this way will be worth more than thousands of Rosaries said all in a rush without any pauses or reflection.

Blessed Alan de la Roche and other writers (including Saint Robert Bellarmine) tell the story of how a good confessor advised three of his penitents, who happened to be sisters, to say the Rosary every day without fail for a whole year. This was so that they might make beautiful robes of glory for Our Lady out of their Rosaries. This was a secret that the priest had received from Heaven.

So the three sisters said the Rosary faithfully for a year and on the Feast of the Purification, the Blessed Virgin appeared to them at night when they had retired. Saint Catherine and Saint Agnes were with her and she was wearing beautiful robes that shone and all over them “Hail Mary, full of grace” was blazoned in letters of gold. The Blessed Mother came to the eldest sister and said “I salute you, my daughter because you have saluted me so often and beautifully. I want to thank you for the beautiful robes that you have made me.” The two virgin Saints who were with Our Lady thanked her too and then all three of them vanished.

An hour later Our Lady and the same two Saints appeared, to them again, but this time she was wearing green which had no gold lettering and did not gleam. She went up to the second sister and thanked her for the robes she had made Her by saying her Rosary. Since this sister had seen Our Lady appear to the eldest much more magnificently dressed she asked Her the reason for the change. The Blessed Mother answered: “Your sister made Me more beautiful clothes because she has been saying her Rosary better than you.”

About an hour after this she appeared to the youngest of the sisters wearing tattered and dirty rags. “My daughter,” she said “I want to thank you for these clothes that you have made Me. The young girl was covered with shame and she called out: “Oh, my Queen, how could I have dressed you so badly! I beg you to forgive me. Please grant me a little more time to make you beautiful robes by saying my Rosary better .” Our Lady and the two Saints vanished, leaving the girl heartbroken. She told her confessor everything that had happened and he urged her to say her Rosary for another year and to say it more devoutly than ever.

At the end of this second year on the very same day of the Purification, Our Lady, clothed in a magnificent robe and attended by Saint Catherine and Saint Agnes, wearing crowns, appeared to them again in the evening. She said to them: “My daughters, I have come to tell you that you have earned Heaven at last and you will all have the great joy of going there tomorrow.” The three of them cried:

Then the vision faded. That same night they became ill and so sent for their confessor who brought them the Last Sacraments and they thanked him for the holy practice that he had taught them. After Compline, Our Lady appeared with a multitude of virgins and had the three sisters clothed in white gowns. While Angels were singing “Come, spouses of Jesus Christ, receive the crowns which have been prepared for you for all eternity,” they departed from this life.

Get this book, it really helped me years ago when i was trying to learn to pray the Rosary well.