Pope Francis has announced that he will give three fragments of Parthenon sculptures, which have been in the Vatican Museums for many years, to His Beatitude Ieronymos II, the Greek Orthodox archbishop of Athens and All Greece. The Vatican stated that the gift is intended to be “a concrete sign of a sincere desire to continue on the ecumenical journey of witness to the truth.”

The Parthenon is a temple in Athens dedicated to the Greek goddess Athena, built in the mid-5th century BC. The temple was part of a larger complex called the Acropolis, which housed a number of other significant structures and served as a symbol of the city’s power and wealth. The Parthenon itself was adorned with elaborate sculptures, many of which depicted the gods and goddesses of Greek mythology.

The three marble fragments that Pope Francis has decided to gift to the Greek Orthodox archbishop include part of a horse’s head from a sculpture of Athena’s chariot, as well as the heads of two male sculptures. These fragments arrived in the Vatican’s collection in the 19th century, and have been housed in the Vatican Museums since then. The Vatican Museums are a collection of art and cultural artifacts that have been assembled over the centuries by the Catholic Church. They include a wide range of items, from ancient Greek and Roman sculptures to Renaissance paintings and modern artworks.

Pope Francis’s decision to gift these Parthenon fragments to the Greek Orthodox archbishop is part of a larger effort to promote ecumenism, or the unity of Christians across different denominations. The Catholic Church and the Orthodox Church have a long and complex history, with periods of conflict and periods of closer cooperation. In recent years, Pope Francis has made a number of gestures aimed at improving relations between the two churches, including his visit to Greece in December 2021, during which he apologized for past actions by the Catholic Church that had “little or nothing to do with Jesus and the Gospel, but were instead marked by a thirst for advantage and power [and] gravely weakened our communion.”

This is not the first time that Pope Francis has made an ecumenical gesture with a centuries-old gift. In 2019, he gave Orthodox Patriarch Bartholomew I a relic of St. Peter, which was seen as “a confirmation of the journey that our Churches have made in drawing closer to one another.” Pope Francis has also made efforts to improve relations with other denominations, including Protestant churches, and has frequently emphasized the importance of unity among Christians.

The Parthenon sculptures that Pope Francis is gifting to the Greek Orthodox archbishop are just a small part of the vast collection of art and cultural artifacts housed in the Vatican Museums. However, their symbolism is significant, as they represent a tangible connection to the rich cultural heritage of ancient Greece, a civilization that has had a profound influence on Western culture and thought. By gifting these fragments to the Greek Orthodox Church, Pope Francis is not only making an ecumenical gesture, but also acknowledging the shared cultural roots of the Catholic and Orthodox traditions.

Pope Francis: I am always joyful when I see young priests 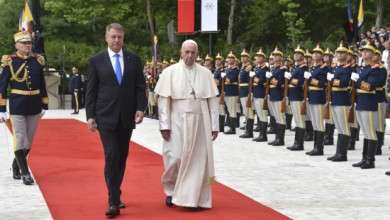