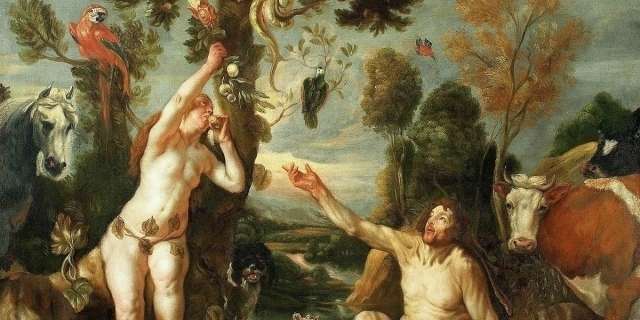 Home » People and History » Life of Saints » AND TODAY WE CELEBRATE… SAINT OF THE DAY: Adam and Eve

+ While not honored as “Saints” in a formal sense, Adam and Eve have been celebrated in many countries on Christmas Eve since the Middle Ages.

+ In Germany, the day was marked by a “Paradise Play,” a telling of the story of salvation from Creation and the Fall (see Genesis 1-3) through the birth of Jesus. The plays often featured a Paradise Tree, whose branches were filled with red apples.

+ As the tradition developed, small white wafers—representing the Eucharist—were added to the tree as a sign of redemption.

+ In the 1880s the Paradise Tree became a popular decoration in people’s homes and glass balls soon replaced the apples hung on the tree, helping create the Christmas tree that we know today.

+ As the celebration of the Paradise Play reminded medieval Christians, the story of Adam and Eve is ultimately a story of salvation, recalling that immediately after Adam and Eve sinned, God promised a Savior who would come to restore humanity and all of creation to God’s grace.

“For if by that one person’s transgression the many died, how much more did the grace of God and the gracious gift of the one person Jesus Christ overflow for the many.”—Romans 5:15

A traditional Advent image for Christmas Eve is the Tree of Jesse. This medieval image was inspired by mystery plays that told the story of the Bible, celebrating the prophets and patriarchs who prepared the way for Mary and, ultimately, for her Son. The Tree depicts the ancestors of Jesus, shown in a tree which rises from Jesse, the father of King David, symbolizing the family tree of Jesus.

and do not delay,

that those who trust in your compassion

may find solace and relief in your coming.

Who live and reign with God the Father