The first Roman church dedicated to the Mother of God

+ According to legend, the Blessed Virgin Mary designated the place in Rome where a church was to be built in her honor by a miraculous fall of snow on August 4 and 5, 352.

+ The basilica was built and dedicated to the Mother of God was completed during the pontificate of Pope Sixtus III in the middle of the fifth century. This Church came to be known as Saint Mary “Major” and it is the oldest church in the West dedicated to the Virgin Mary and is one of the four “patriarchal basilicas” of the city of Rome.

+ Originally this feast was a local celebration, limited the city of Rome, but it was extended to the Universal Church in 1586.

+ Although scholars and historians agree that the story of “Our Lady of the Snows” is a pious legend, the devotion has endured for a millennium. As a testament to this, The Missionary Oblates of Mary Immaculate sponsor a shrine dedicated to Our Lady of the Snows in Belleville, Illinois. The shrine has hosted millions of visitors over the decades and is the largest outdoor shrine in the United States.

you protect us with your precious veil

and so preserve all Christians from evil.”—“Hymn of Light” from Matins of the Orthodox Feast of the Protection of the Mother of God

On this day we also remember a group of ten Augustinian priests who were martyred on August 5, 1936, during the anti-Catholic violence of the Spanish Civil War. Honored as the “Martyrs of Fuente la Higuera,” they were beatified in 2007.

pardon the sins of your people.

May the prayers of the Mary, the Mother of your Son,

help to save us,

for by ourselves we cannot please you.

Grant this through our Lord Jesus Christ, your Son,

(from The Liturgy of the Hours) 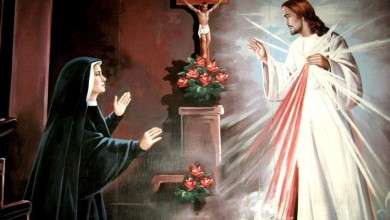 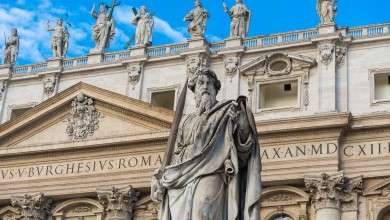 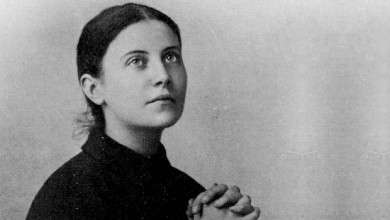